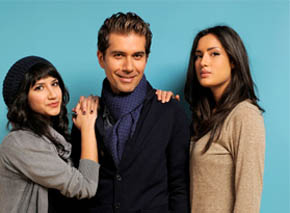 Iranian-American writer-director Maryam Keshavarz’s debut feature “Circumstance,” featuring TFT acting alumnus Reza Sixo Safai ’96, MFA ’99 in a complex leading role, won the Audience Award at Sundance in January and played at numerous festivals over the past year, including OutFest in Los Angeles and the prestigious New Directors/New Films series for 2011.

Now the film has opened nationwide to celebratory reviews.

"Circumstance" ripples with the indignant energy of youthful rebellion. Coming two years after the protests that convulsed Iran following the 2009 presidential elections and amid regional revolutionary turmoil, it has undeniable topical resonance. But Ms. Keshavarz is less interested in the public manifestations of political engagement than in the ways power, and particularly religious authority, affect the intimacies of families, lovers and friends."

"The serpent in their garden of delights is Mehran (Reza Sixo Safai), Atafeh's brother, a former musician and recovering drug addict whose embrace of stern Muslim morality threatens the easy, hypocritical harmony that has protected the family. His interest in Shireen, mildly creepy at first, grows less mild and more sinister as the film progresses toward its final crisis."

"One of the most thrilling directorial debuts of this year, Maryam Keshavarz's Circumstance is an edge-of-your-seat thriller with silk-sheet sex; a soap-operatic family melodrama with double-crossing siblings; and an exploration of the power of the state in the private sphere.

Iranian filmmakers who cross over into American art houses (Abbas Kiarostami or Jafar Panahi) have become known for intense levels of realism (often featuring untrained actors), bare-bones production values, and spare allegories. But Keshavarz's Tehran hews closer to the hard-rocking, pop-addled Iran of Marjane Satrapi's Persepolis, and her style seems more indebted to the soapy excess of Douglas Sirk, the warm lusciousness of Bertolluci, or even Almóodovar's kinky talent for mashing up the domestic and the profane, the ludicrous and the weighty. The film, shot lavishly by Brian Rigney Hubbard, moves with a fluid rhythm — and its few stumbles are of the most excusable, overambitious sort."