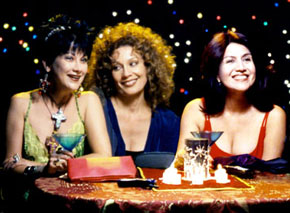 “Luminarias” (2000) was a labor of love for the husband and wife team of screenwriter and star Evelina Fernandez (adapting her successful play) and director Jose Luis Valenzuela, TFT professor and director of both the New New LATC and the Latino Theater Company.

Much of the cast of the original stage production reprised their roles in the film, including Dyana Ortelli, Marta DuBois, Angela Moya, Seidy Lopez, Sal Lopez, Robert Beltran and Geoffrey Rivas. Many of those those performers, and others, will be on hand on the 20th, along with Fernandez and Valenzuela.

The ticket price for this special benefit event includes includes a VIP peception at 7 PM, the screening at 8 PM and an after-party.