Hollywood Reporter ranks TFT among the top five on earth 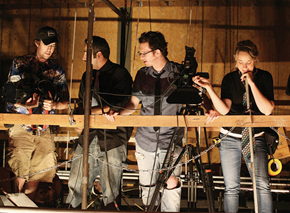 T“Its vibe is distinctly different,” writes The Hollwood Reporter’s Tim Appelo of TFT, including the UCLA School of Theater, Film and Television in the magazine’s first-ever ranked list of the world’s best film schools.

A “multicultural campus that ranks among the best in California,” is cited as one of TFT’s defining assets — as is the School’s new dean, Teri Schwartz:

It has benefited from such prestigious graduates as Francis Ford Coppola and Alexander Payne; from teachers like producer Peter Guber; and from its connection with the respected UCLA Film & Television Archive, whose collection is “second only to the Library of Congress,” according to Dean Teri Schwartz. The well-regarded Schwartz will likely determine UCLA’s future standing: After serving for years at Loyola Marymount, the former producer (and Goldie Hawn’s onetime producing partner) joined the university in 2009, replacing veteran Robert Rosen. Now insiders are waiting to see how things will change under her leadership. Look for her to stress ‘humanistic storytelling and global diversity’ — quite different from the commercial emphasis of many other film schools.

A key quote was adapted from a piece on this website:

“The key is having a point of view — which is very much the UCLA approach. You could say UCLA filmmakers try to bring an indie attitude even to studio pictures. We always try to find some kind of subjectivity.” — Justin Lin, director, Fast Five