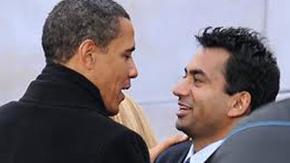 This week, actor Kal Penn left Washington, D.C., after serving two years as White House associate director in the Office of Public Engagement. In D.C., he used his real name, Kalpen Modi, and worked in the Barack Obama administration after persuading the producers of House to kill off his character so he could pursue a path that was not without risk.

Penn is half of the Harold and Kumar stoner duo that is a contemporary answer to Cheech and Chong, but in real life he’s a bright guy who’s working on a graduate certificate in international security at Stanford and who once served as a visiting lecturer in Asian American studies at the University of Pennsylvania.

Penn will now try to reclaim his career with A Very Harold & Kumar 3D Christmas coming this fall, a stint on the CBS sitcom How I Met Your Mother and a permanent place (he hopes) as the star of a sitcom vehicle he’ll create for NBC with Dan Spilo. He spoke to Deadline about his detour and why interrupting his momentum for two years was worth it.