Derek the Ghost on the art of scaring young people 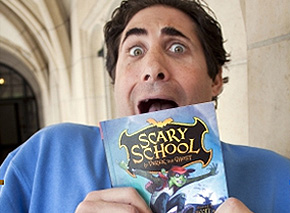 "Scary School," the first volume of a projected trilogy of creepy stories for young people, published June 21, 2011, marks the latest chapter in the unexpected journey of TFT alumnus Derek Taylor Kent '00 toward a literary career as a "ghost writer." (His pen name for the "Scary" series is Derek the Ghost.)

Kent has been writing since the age of 15, creating various forms of amusement with premises not quite as spooky. For one free-form assignment in a UCLA astronomy course, Kent penned an interplanetary-themed story aimed for a younger audience, using his professor, Simon Balm, as the main character. After some tweaks and some illustrations, Kent had "Simon and the Solar System," his first book aimed for younger children. As an undergraduate student in UCLA's School of Theater, Film and Television in the late 1990s, Kent produced a short musical called "Michael Jordan's Magic Shoes." With just a boombox and other minimal props, Kent told a story centered around the famous basketball player's discovery of sneakers with mystical powers. 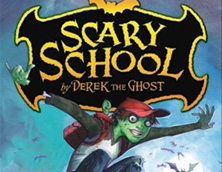 As Kent told “The Daily Bruin's” Steve Greene in April,
"The story ends up revolving around Charles Nukid, this skinny weakling of a kid who loves following the rules more than anything...I wanted to create a character who would have the least chance of survival at Scary School and figure out a fun way to survive."

During one of Kent's first performances in the Murphy Sculpture Garden outside Macgowan Hall, the show caught the eye of Gary Gardner, the vice-chair of the theater department at that time. Gardner asked Kent to perform it at orientation for all the incoming members of the theater program.

"I was dumbstruck; it was so sweet," Gardner said. "It was the most wholesome, obviously crowd-pleasing piece, and it showed the best of young people."