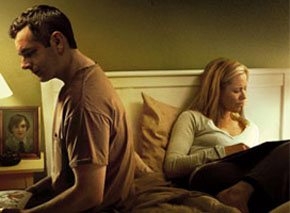 Shawn Ku’s rapturously reviewed "Beautiful Boy," co-written by Professional Program in Screenwriting alumnus Michael Armbruster MFA ’04, stars Maria Bello and Michael Sheen as the grief-stricken parents of a college student who mows down several classmates before turning his weapon on himself.

Picked up for distribution at the Toronto International Film Festival by Anchor Bay in 2010, the film continues to play in several theaters in Los Angeles. After earning an MBA degree from Harvard and spending five years making candy commercials as the head of marketing for a division of Nestle, Armbruster moved on to UCLA, where his father-son road-trip drama “End of Sentence” won Screenwriter’s Showcase and was a semifinalist in the Nicholl Fellowships.

A comedy short he wrote, “Collectibles,” won a student DGA award in 2008 and played at festivals all over the world. Another original feature spec, “Bohemian Nut Roll," placed 2nd out of 4000 submissions at the Austin Film Festival and has since been optioned. Despite its grim-sounding content, the film comes highly recommended by critics. An NPR reviewer referred to the film as:

"a soft sledgehammer of a movie, its impact achieved not by way of tricks or contrived catharsis but through an honest confrontation of attenuated emotional pain. The most astonishing thing about it may be that it exists at all, unfolding as it does without a single feel-good moment or even the hint of a joke. In their place stretches a map of suffering and an acknowledgment that the psychobabble of our culture is completely useless: When Bill is forced to appease the victims’ families with a public declaration of remorse — as if remorse should not be the default assumption — the redundancy of the exercise could not be more clear."

Armbruster has had several other projects under option, including the comedy “Tiny Dancers,” written with Shawn Ku, which is currently with Michael London/Groundswell (“Sideways”). He has developed original screenplays with Larger Than Life Productions (“Seabiscuit”) and Michael Taylor (“Bottle Rocket”). In addition, he has been hired for writing assignments by Disney, Tim Allen and Gold Circle Films (“My Big Fat Greek Wedding”), among others, tackling stories from the New York Philharmonic to the Texas drag races.