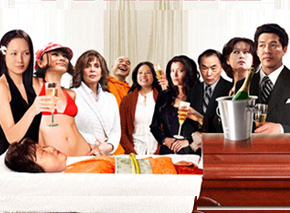 Anna Chi: From the Red Guards to a film career

Filmmaker Anna Chi may well be the only student to come to the UCLA Production/Directing program from a stint in China’s infamous Red Guards. During the Cultural Revolution of the 1970s, Chi served the People’s Republic as an enthusiatic traveling propagandist.

“If you asked me today, I don’t know that I’d say I hate or love [the Communist Party],” Chi told the “Los Angeles Times” recently, “because all my experience is from that very manipulated and, in a sense, innocent kind of child’s point of view.”

After working as an assistant to such filmmakers as Oliver Stone (“Nixon”), Jon Avnet (“Red Corner”) and Chen Kaige (“Killing Me Softly”), Chi

directed and co-wrote the 1998 independent thriller “Blindness” and in 2007 directed the Mandarin-language scenes in Wayne Wang’s “A Thousand Years of Good Prayers.”

Most recently Chi devised the story for and directed the indie family drama “Dim Sum Funeral.”

"The U.S.-Canadian co-production — whose large ensemble cast includes Russell Wong, Bai Ling, Steph Song, Julia Nickson, Françoise Yip, Kelly Hu and Talia Shire — was inspired by an idea Chi hatched several years ago after lunching with a friend from Hong Kong who had come to L.A. for her father’s funeral. “She started talking about her father and about the things she wished he’d said to her — and her to him,” remembered Chi. “I thought, ‘Wouldn’t it be nice, before we died, if we could actually hear what other people had to say about us, especially the ones we love? We would die with less regret."