Dean Schwartz celebrates our graduates with Boxer, Burnett and Hargitay 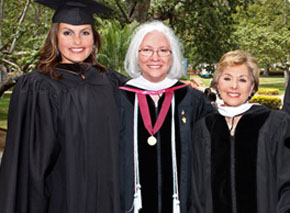 United States Senator Barbara Boxer delivered a memorable address at the TFT commencement ceremony on June 10 — even breaking into song at one point, to delighted applause from assembled faculty members, graduating students and their family and friends. Boxer deftly wove into her remarks a discussion of the importance of the work done by storytellers to the well-being of society. 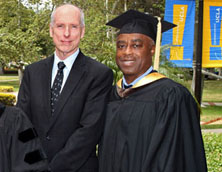 Barbara Boxer was first elected to the United States Senate in January 1993, after 10 years of service in the House of Representatives. She made history in 2004 when she was elected to a third term with more than 6.9 million votes – the highest number ever for any a U.S. Senate candidate.

A champion of public education, Boxer is known for her strong advocacy on issues related to families, children, consumers, women and medical research. She chairs the U.S. Senate Committee on Environment and Public Works, becoming the first woman to hold this office. Her awards are numerous, ranging from environmental causes to leadership awards.

Emmy, Sundance and Independent Spirit Award winner Charles Burnett is one of the most distinguished African-American cinematic in film. He has endeavored to bring to the screen a personal, realistic portrayal of contemporary African-American life not often seen in mainstream feature films. Critically acclaimed for all of his work for both feature films and television, Burnett is best known for his films "Killer of Sheep," "To Sleep with Anger" and "The Glass Shield." Burnett received a major retrospective of his work at the Museum of Modern Art in New York City in April 2011.

Emmy and Golden Globe Award winner Mariska Hargitay stars as the committed and emotionally driven Detective Olivia Benson on "Law & Order: SVU," now in its 12th season on NBC. Inspired by her role, Hargitay founded in 2004 the Joyful Heart Foundation, whose mission is to heal, educate and empower survivors of sexual assault, domestic violence and child abuse, and to shed light into the darkness surrounding these issues.