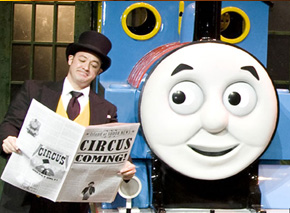 The entertainment news blog “Deadline Hollywood” is reporting that Animation Workshop alumnus Shane Acker, whose TFT thesis film “9” became a feature in 2009 for producers Tim Burton and Timur Bekmambetov, has signed to direct a big-screen adaptation of the iconic kid’s TV series “Thomas the Tank Engine:

”HIT Entertainment, rights holder to the “Thomas the Tank Engine” kiddie juggernaut, is moving forward with its first live-action theatrical film. Shane Acker, who directed the 2009 animated film “9,” will direct a film set in Sodor, the island of talking trains, where Thomas is among a litany of characters. Weta Workshop and Mattel’s entertainment properties design team have joined the creative team, and the financing and distribution is being sold by Cinetic Media and the UTA Independent Film Group. The script was written by Chris Viscardi & Will McRobb, and Shrek the Third’s Josh Klausner.

Created 65 years ago, Thomas the Tank Engine has been the number one preschool toy license in the UK for 11 years. It has held the top spot in the US for a decade. Since the core audience of Thomas is preschool age, the choice of Acker as director is surprising. After all, he’s best known for turning his student short film “9” into a Tim Burton/Timur Bekmambetov-produced animated feature about a rag doll that awakens in a post apocalyptic world and battles a soul-stealing monster. Acker acknowledges that he wants to broaden the movie’s audience beyond pre-schoolers, but has no interest in causing nightmares.

"I’m a recent father, with a 20-month old daughter,” he told Deadline. “We lead such busy lives in Hollywood, always running and hustling, but children tend to slow you down a bit and reconnect you with that inner world. It reinvents your imagination, seeing things through a child’s eyes. It was transformative for me and that is what inspired me about the possibilities here. The tale will revolve around a pre-teen boy who has drifted apart from his father. The son is introduced into this world of Sodor, a place his father visited as a child but can’t remember. There is a bonding experience.”