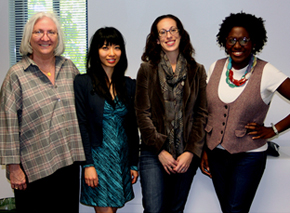 Teri Schwartz, Dean of the UCLA School of Theater, Film and Television (TFT), has created a special fund at the School to support ELEVATE, a new organization created by TFT students that "aims to give voice and visibility to the diverse contributions of multicultural filmmakers, theater practitioners and scholars by sponsoring film screenings, lectures, social gatherings and alumni networking opportunities," according to its mission statement.

ELEVATE will hold its first meeting on May 25, 2011. Open to all TFT students, it will also offer members small grants for research or screenings of work that advances the organization's mission. Membership is free.

"I am thrilled to be able to support this outstanding new organization for TFT. I applaud the efforts of Sam, Mila and our amazing students who created this wonderful opportunity for all of our students to come together in such a special way. I can think of no better way to strengthen the richness of our TFT community than through the mission of ELEVATE," said Dean Schwartz.

"I raised my hand and said 'As a woman of color, there are a lot of issues within the program that I would love to be able to discuss with you,' and she was so open to it," Sheppard said. "The second I raised my hand, other women of color in the room were like, 'Oh, hey, let's talk.' So we set up a lunch with the dean and started talking."

The students raised several concerns at lunch, including their perception that the faculty appears less diverse than the student population, Sheppard says. They also wanted more networking events that would include alumni of color, Sheppard says.

"The students want to see people who look like them," Sheppard says. "If you don't see yourself in the places you want to be — whether that's across you as a professor or as a head writer or a director — it sort of stunts the way you see your growth."

Dean Schwartz challenged the students to create a task force that would identify problem areas and come up with proposed solutions. In a series of monthly meetings that included minority women from every department within the school, the task force outlined five areas where diversity could be improved: faculty hires, course offerings, diversity training for professors, student recruitment and alumni networking.

When the task force also proposed starting a student group that would encourage diversity, members were happily surprised that Dean Schwartz not only endorsed the idea but agreed to create a special fund to support it, Sheppard says.

"It showed her full level of commitment," says Sheppard. "If you want global diversity, if you want the students to feel like UCLA is about them and you want to create a great research, production and theater and film industry, then you have to support that ideologically and financially. Dean Schwartz has fully done that beyond our expectations and we're excited to have her support."

Sheppard and fellow student, Mila Zuo, who is also a second-year graduate student in Cinema & Media Studies, will serve as ELEVATE's first co-chairs. Zuo came up with the name ELEVATE to represent what the group is trying to achieve.

"A lot of creative labor coming from people of color is, unfortunately, invisible, or just not as visible as other sorts of mainstream, white-dominated cinemas," Zuo says. "We're really trying to raise the level of visibility."

Unlike some previous student organizations that sequestered minority filmmakers into their own separate groups, ELEVATE's mission of including students of all backgrounds and ethnicities reflects the realities of today's world, says Assistant Professor Allyson Nadia Field, who serves as ELEVATE's faculty adviser.

"Students today are very much about working across different cultures and experiences and backgrounds and thinking in a more multicultural context," says Field, an Egyptian-American woman who studies African-American cinema. "And ELEVATE really reflects that idea."

Each division of the school will be allowed to elect a representative to the board, but all members have the right to vote. "We want to make sure we create something that will sustain itself long after we're gone," says Sheppard, who expects to earn her doctorate by 2013. "Part of the by-laws is that the group can change to serve the community it creates."