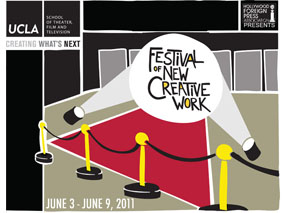 Aaron Sorkin, Allison Anders, June Foray, Stacey Snider, Lawrence Bender and Lisa Cholodenko will be among those honored at this year's Festival of New Creative Work. The annual weeklong festival showcases and screens the works of TFT's emerging artists, and honors the work of the entertainment industry's brightest and most respected. Honorees are chosen by students voting within their particular discipline. The festival begins Friday, June 3, and runs through Thursday, June 9, 2011.

Anders will receive the Distinguished Alumnus/Production Award at the festival's opening night, Friday, June 3. The award-winning director, writer and producer is best known for her films "Mi Vida Loca," "Four Rooms," "Gas, Food Lodging" and "Grace of My Heart." Anders is a UCLA TFT graduate, class of 1986.

Academy Award winner Aaron Sorkin will be honored with the Distinguished Achievement in Screenwriting Award at the Festival's Screenwriters Showcase on Monday, June 6, at the Ralph Freud Playhouse. Sorkin recently received an Oscar for writing "The Social Network." The 16th annual Screenwriters Showcase, hosted by TFT alumnus Mike Werb ("Face Off," "The Mask," "Laura Croft: Tomb Raider"), also celebrates the work of UCLA’s Graduate Screenwriting students. Portions of eight scripts will be previewed in staged excerpts. These scripts have been selected by a panel of more than 200 industry judges in a competition that began in March.

Opening night will also highlight a collection of top narrative, documentary and animated films coming out of TFT. Student-voted awards will also be presented for graduate and undergraduate work in a variety of categories, such as Excellence in Screenwriting, Art Direction and Editing.

At the Festival's Producers Marketplace, June 7, Producer's Guild Co-President Hawk Koch will present this year's UCLA TFT's Vision Award to Producer Lawrence Bender at the Billy Wilder/Hammer Museum. Bull's Eye Entertainment partner and producer of Crash and The Illusionist, Tom Nunan, will be the evening's host.

In addition to the Vision Award presentation, the Producers Marketplace will feature three graduate student finalists from UCLA's distinguished Producers Program: Ryan Slattery's "Burden Of Proof," Aisha Summers for "Confessions of A Modern Day Dog" and "The Poker Kid" from Michael Acosta. Each finalist will present their feature film projects to a panel of top-tier industry judges, take to the stage and present their five-minute concept pitches. They will then field a battery of questions from the judges about how they plan to get their projects made. The judges will select the most promising proposal and present the winning producer the UCLA Producers Marketplace Award, as well as a cash award from Producer/Alum Dan Angel ’90. The audience will also get to select its favorite pitch. The Vision Award is presented by the Producers Guild of America and UCLA's TFT.

At Animation Prom night, legendary voice-over actress June Foray will be presented the Outstanding Contribution in Animation Award, also known as The Crystal Anvil Award. Foray's celebrated career is a part of Hollywood history. Perhaps best known for voicing the role of Rocky the Flying Squirrel in "The Rocky and Bullwinkle Show," Foray also played the voice of Lucifer in Disney's "Cinderella," plus scores of popular and classic characters. Students will also be awarded for their work in animation that night, June 4, as well.

The vision of the UCLA School of Theater, Film and Television is to serve as a premier global interdisciplinary professional school that develops outstanding humanistic storytellers, industry leaders and scholars whose diverse, innovative voices enlighten, engage and inspire change for a better world. Consistently ranked as one of the top elite entertainment and performing arts institutions in the world, the School offers an innovative interdisciplinary curriculum that integrates the study and creation of live performance, film, television, animation and the digital arts. Our distinguished graduate and undergraduate programs include acting, directing, writing, producing, animation, cinematography, lighting design, set design, costume design and sound design, and offers PhDs in Theater and Performance Studies and Cinema & Media Studies. The UCLA Festival of New Creative Work is your first opportunity to see this philosophy in action.