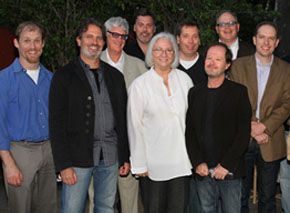 Writers from 'The Simpsons' talk shop

Your first day at TFT is your first day as lifetime member of the TFT alumni network.   That's the message that emerged most clearly from the inaugural public event created by the new TFT Young Alumni Network, a laugh-filled panel discussion featuring eight smart and funny writers from "The Simpsons."

The series, now approaching its landmark 500th episode after more than 20 years on the air, has employed many Bruins as writers, animators, designers, directors and producers over the years, which made it a perfect fit with the goal of the Young Alumni Network: To serve as a catalyst that brings all TFT alumni together.

Dean Teri Schwartz created the network to generate opportunities for young Bruins at the start of their careers, to interact with alumni who are established veterans. Schwartz remembers vividly how hard it was to make connections in the industry when she was starting out as a movie producer in the 1970s, and set out to create for today's students “the opportunities I wish I had had.”

TFT alumnus and panelist David Silverman is often described as the “founding director” of “The Simpsons,” because he was the first person to animate creator Matt Groening’s characters when they were introduced in brief cartoon segments on “The Tracy Ullman Show” in the late 1980s.

As TFT animation professor and Emmy-winning “Simpsons” director Chuck Sheetz pointed out in his introductory remarks, in addition to the dozens of Bruins who have worked behind the scenes on the show, eight of the program’s 36 directors were graduates of our Animation Workshop, responsible for a total for 118 episodes.