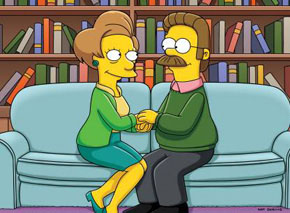 Tune in Sunday, May 22nd at 8 p.m. on FOX to see “The Simpsons” season finale directed by Emmy-winning TFT Professor Chuck Sheetz.

Feeling guilty for getting Mrs. Krabappel suspended after one of his school pranks, Bart helps her escape detention, and Ned Flanders winds up saving her life in the process. When Edna and Ned start dating, he is surprised to learn she's been with many of Springfield’s men, including Homer and Aerosmith drummer Joey Kramer (guest-voicing as himself).

The 2011 Fox Simpsons fan initiative will be launched after the airing of the The Ned-Liest Catch. Fans will decide which of two of Springfield’s favorite’s lives will be changed.