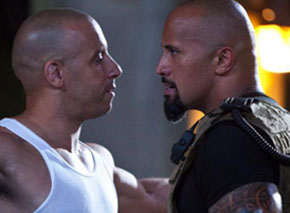 TFT alumnus Justin Lin '95 is now officially one of the world's most successful film directors. His supercharged action movie, "Fast Five," which brings Duane "The Rock” Johnson into the "Fast and Furious" street-racing franchise, to smack down with returning stars Vin Diesel and Paul Walker, opened in Europe and Asia a week before its debut in the US and has become a true global blockbuster – a path-clearing multi-ethnic 21st century phenomenon. It was the number one film on earth in its first two weeks of release and the biggest international hit in Universal Picture’s history.

We asked TFT staffer Sheila Roberts to update the excellent profile and interview she wrote for us when Lin's previous contribution to the franchise, "Fast & Furious" was released in 2009, following the 2006 installment “Fast and Furious: Tokyo Drift.”

Justin Lin has been a fan of the franchise ever since he saw “The Fast and the Furious” on its opening weekend when he was a TFT directing student. He knew, he says, exactly what he wanted to accomplish in his latest contribution to the series: It would be a one-two punch of inspired casting coupled with jaw-dropping action.

Lin reflects: “I felt like there were still a lot of areas where this franchise could go. I appreciate that the studio has never asked me to recycle the same thing over and over again. By virtue of that, this franchise has been able to grow and evolve and mature. I came back for that reason.”

Lin's breakthrough feature “Better Luck Tomorrow” (2002), filmed on a budget of just $250,000, was a startling suburban noir about “model minority” Asian-American high school boys drifting into crime. It established his reputation as a stereotype-buster.

Arguably it was an even bolder move for Lin when he ventured off the indie cinema reservation into the glossy realm of mainstream Hollywood commercialism. But Lin has been forthright about acknowledging that he grew up enjoying, and wanting to make, the same kinds of high-octane popcorn movies as other filmmakers of his generation.

He says he was instantly intrigued by the sub-culture of underclass street racing the “Fast and Furious” films portray, but adds, “The core theme of the series is family. ‘Fast & Furious’ explored the sacrifice elements of family. As soon as I was able to grasp that the next one should be about freedom and family, it became clear to me why I wanted to return.”

Lin knew if he were to helm his third film in the series, the expectations from the fans would be huge. "I know the action in this one is bigger than the last two combined. There are about six action pieces in this movie, not just car chases, but foot chases and a heist as well. It's just jam-packed."

Lin recalls his experience shooting “Fast Five’s” complicated pivotal heist sequence: “The train heist was a challenge. The logistics of doing a train heist were much greater than the land train that we had in the last one. On this film, we had to get permission to basically own a piece of a working railroad. Then we had to buy trains and build these trucks that were able to go up against the trains. I wanted a car to be jumping out of the train at full speed, and then there were trestles that become an obstacle for our characters. It was costly, and it took precise execution.”

Lin's career has risen steadily as his "Fast" films have gone from strength to strength. He is the official attached director on a planned re-boot of the "Terminator" franchise, which will feature former California governor Arnold Schwarzenegger’s return to his most iconic role.

“The Terminator was one of my favorite films growing up," Lin has said, "and I feel I have a take that I would love to see. I've talked with Arnold, and now we'll see.

According to several sources, it was Lin’s pitch of his concept for the film that persuaded Schwarzenegger to return, though he’s declined to discuss details. “It’s still very early on" Lin says, "but I don’t want to make a movie where it’s just showing off [technology and special effects]. I want to support the human elements. If you don’t have humanity, then it just becomes robots.”

“The key is having a point of view — which is very much the UCLA approach to working on these things … You could say UCLA filmmakers try to bring an indie attitude even to studio pictures. We always try to find some kind of subjectivity or point or view.”