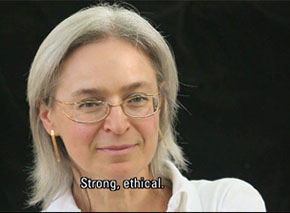 Marina Goldovskaya on a lost friend, her fatherland, her films

At 70, adding a powerful new work to a lifetime of achievementaaaaaaaaaaaa

The powerful new personal documentary by TFT faculty member Marina Goldovskaya, head of TFT’s documentary program, is an intimate portrait of an assassinated Russian journalist who was also a close friend.

The new film, “A Bitter Taste of Freedom,” was the centerpiece of a sweeping career retrospective of the filmmaker’s work at the 16th annual edition of the international documentary festival “It’s All True,” which ran from March 31 to April 10, 2001, in São Paulo and Rio de Janeiro, Brazil. 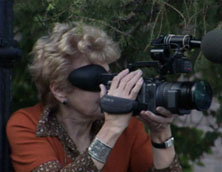 The retrospective at “It's All True 2011 – 16th International Documentary Film Festival” celebrated the work of “the principal Russian documentary filmmaker,” a director whose classics of the post-Glasnost era, such as “Solovky Power” (1988) and “The House on Arbat Street” (1994), recorded all the major historical events of a period of momentous change in her homeland, from Glasnost and Perestroika under Mikhail Gorbachev to the dashing of hopes for democracy under current strongman Prime Minister Vladimir Putin.

Goldovskaya’s heartbreaking new film “A Bitter Taste of Freedom” (2011) is a chronicle of an occurrence that exemplified the disillusionment of many in Russia: the murder in 2006 of investigative journalist Anna Politkovskaya, whose reporting on the atrocities committed by Russian troops against refugees from the conflict in Chechnya painted a grim picture of the rebirth of political repression in the former Communist nation.

“A Bitter Taste of Freedom” is also a personal portrait and celebration of the life of a close friend: Politkovskaya met her future husband when he was studying with Professor Goldovskaya at Moscow State University in the 1970s. In footage of the writer and her family from an earlier film, “A Taste of Freedom” (1991), Politkovskaya comes vibrantly to life as she is interviewed by an admired teacher, and in the process her loss becomes a personal matter for the audience as well, meeting her for the first time.

"It is an incredible honor to salute Marina Goldovskaya's 70th birthday with the first large festival retrospective of her work," says critic Amir Labaki, director of "It's All True" and curator of the retrospective. "In her unique recordings between the personal and the social, no one has better documented the turbulent period of the end of the USSR and the beginnings of the new Russia. It's not by chance that her memoir is called 'A Woman with a Movie Camera.'"


Marina Goldovskaya on “A Bitter Taste of Freedom”:

Anna and her husband Sasha were my students at Moscow State University. Later, as both their careers as journalists took off, we became close friends. In 1991, I made “Taste of Freedom,” a documentary about them. I wanted to describe how the changes introduced by Mikhail Gorbachev, perestroika>/i>, affected life in the USSR using as an example the Politkovsky family.

It so happened that making this film prompted me to undertake a long-term project of chronicling Russia’s transition from totalitarianism to democracy. Perestroika came about unexpectedly and brought beautiful, euphoric feelings of hope for a better future. At that time, of course, I couldn't imagine how difficult and dramatic this transition would turn out to be for Russia and for the Russian people.

This ongoing project has resulted so far in 10 documentary portraits of my country of origin at different stages of its development, including “Shattered Mirror” (1992), “Lucky to Be Born in Russia” and (1993), "House on Arbat Street" (1994). "A Bitter Taste of Freedom" (2011) is the latest installment in my continuous observation of the last two decades of Russian history. This film returns us to the Politkovsky family 20 years later.

The children grew up. Sasha Politkovsky, famous and talented, left not only the profession of journalism but also his family. In contrast, Anna became a well-known investigative journalist for the Moscow liberal newspaper "Novaya Gazeta."

Anna was writing about the atrocities of the infamous Chechen war, often the only spokesperson for the innocent victims. She was a fearless woman and an uncompromising critic of the Russian authorities. Her activities went far beyond journalistic reporting: she was a true human rights activist defending civilians whose lives were being destroyed by the dirty and criminal Chechen war.

In spite of numerous threats she continued to do her job. She was assassinated on October 7, 2006.

Anna and I were friends. We trusted each other and always had a lot of things to share and discuss. When we met, we couldn't stop talking, and I could not stop filming. We spoke not only about her work but about everything.

Since her assassination, Anna has become a symbol for the struggle against tyranny and corruption, an iron lady. As time passes, she is becoming more and more a myth. Our film “A Bitter Taste of Freedom” shows Anna as who she was: a normal woman, tender with her friends, loving with her children, and uncompromising with those who abuse the human rights of simple people whoever they were: Chechens, Russians or anyone else.

I feel very strongly that a film about somebody like Anna is especially important now, when the world is so full of cynicism and corruption, when we so desperately need more people with her level of courage and integrity and commitment.

Films in the “It’s All True” Retrospective

“A Peasant from Archangelsky” (60 min, 1986). The story of Nikolai Semenovich Sivkov, the first to oppose the system of rural collectivization imposed by Joseph Stalin.

“A Taste of Freedom” (46 min, 1991). The era of hope of Perestroika of the 1980s/1990s is examined through Sasha Politkovsky, TV journalist, his wife Anna Politkovskaya, and their children.

“The Shattered Mirror” (58 min, 1992). The great changes that shook the old USSR are analyzed through the director’s deeply personal gaze.

“The House on Arbat Street” (59 min, 1993). This is a synthesis of Russian history in the 20th Century that comes from the memories of residents and archival material about a house that went from an aristocratic home to collective housing after the Revolution of 1917.

“Lucky to Be Born in Russia” (58 min, 1994). The film is a human insight about the happenings of the Russian Federation in 1993, when ethnic and separatist conflicts cast doubt on the future.

“The Prince is Back” (59 min, 2000). This is the story of the dream and struggle of Prince Eugene Meshersky to restore the castle and glory of his family, on the outskirts of Moscow.

“Anatoly Rybakov, the Russian Story” (52 min, 2006). The author of “Children of the Arbat,” persecuted by Stalinism, recalls his life and the story of his parents.

“A Bitter Taste of Freedom” (90 min, 2011). The filmmaker recounts the life of combative journalist Anna Politkovskaya, her friend and the focus of the documentary, murdered in 2006 at 48 years old.