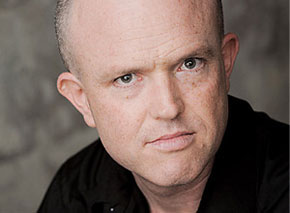 In MTV’s online advertisement for “Skins,” a new teenage drama based on the popular British series of the same name, writer and TFT grad Matt Pelfrey MFA ’05 enthusiastically plugs the show for portraying "the wild ride of being a teenager in America today.”

That promo for the show, which is slated to premiere in January 2011, made Matt the target of a nasty attack by at least one fan of the British show, a TV blogger who didn't want the US version to borrow plot elements from the original. The blogger said Matt is “not a writer, he is a high-priced copy machine.”

Matt, whose award-winning, critically acclaimed plays have been produced in New York, Los Angeles, Chicago and South Africa, described the criticism as “weird, especially since the US version is being created by Bryan Elsley, the man who co-created the UK version. We're following Bryan's vision and he knows ‘Skins’ better than anyone."

“Some fans of the original hate us,” Matt said. “They're upset because they don't want it to be exactly like the British version. But it's all unfounded. It's a little easier to take because once they see the show, they will change their opinions.”

Matt, who is writer-in-residence at Furious Theatre Company in Pasadena and taught playwriting at UCLA, was one of three young writers out of 400 who won writer spots on the US version of the show, which was shot in Toronto but developed in New York. The gritty drama, named after a British slang term for condoms, casts real teenagers and keeps characters a maximum of two years before making them "graduate.”

One of the young stars of the UK “Skins,” Dev Patel, graduated to the title role in the Oscar-winning feature film “Slumdog Millionaire.”

“This allows us to kill characters and have life-changing things happen without worrying about the cast aging out of the story,” Matt said. “Having people die and leave makes the stakes higher.”

The British version, which has run for five seasons, ensured its authenticity by drawing heavily on the input of local teens who participated in roundtable discussions with Elsley and his team of writers. Teens who show an interest in writing are encouraged to co-write three-to-six minute weekly “webisodes” which expand on or refer to the regular episodes. 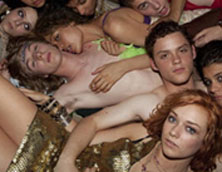 Elsley used the same strategy in developing the US version of “Skins,” which included more than a dozen New York teenagers, some of whom made video diaries from the point of view of the characters. Matt played a key role in turning these video diaries into webisodes; he co-wrote and directed half of them, in addition to the writing he did for the regular episodes.

“It's been fantastic to work on my first TV show,” Matt said. “The entire experience was new and we all got along great.”

Matt, who lives with his wife and two young children in Pasadena, had to temporarily relocate to New York while the show was in development. Not expecting his contract to be renewed, he gave up the lease on his apartment and ended up living out of a sleeping bag in the “Skins” writer’s office for five weeks.

“I would write until 10 p.m., go to sleep and then wake up,” Matt said. "It was an interesting experience never leaving my job."

As a father, Matt admits he felt “terrified” at times by the stories told by some of the New York teens who helped develop the show. But, he says, he believes “Skins” does them a service by accurately portraying the world they live in.

“‘Skins’ doesn’t preach,” Matt said. "It tells honest stories about teens and that's going to include sex, drugs and rock and roll. If you're preachy, it goes in one ear and out the other. If you're not talking down to them, they will respect the characters more and be able to absorb the lessons on their own.”