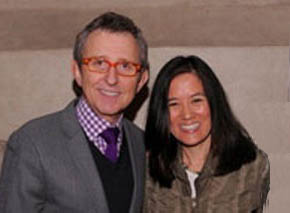 Kubota, who passed away from colon cancer in 1992, was Whitney’s sister and the woman who made it possible for Whitney to pursue her theatrical dreams at TFT. In honor of her sister, Whitney set out to create a scholarship that could make a significant difference in students’ lives, especially those putting their dreams on hold due to financial constraints.

Whitney pursued her love of theater at UCLA and had success as an actress and singer in the 1980s. It was at UCLA where she met and became friends with Schumacher. Their friendship continues to this day, as does their commitment to theater.

UCLA’s continued support has helped propel the success and longevity of this scholarship, allowing hundreds of students to attend UCLA with a solid foundation to achieve their goals and reach for their dreams.