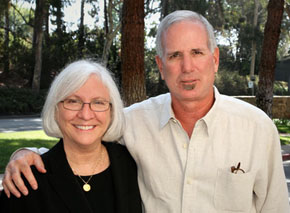 In the end, good reviews trumped the advance controversy surrounding “The Kennedys,” an 8-hour historical miniseries produced by TFT alumnus Joel Surnow ’76, the Emmy-winning co-creator and executive producer of “24.”

Welcomed as Guest of Honor at orientation 2010, Surnow warned students never to forget how tough the entertainment industry can be – practical wisdom that no doubt came in handy when “The Kennedys” was canceled by History, the cable channel that commissioned it.

The program wound up as a heavily advertised flagship attraction on Reelz Channel, debuting April 3.

Surnow recently explained his sense of things to The Hollywood Reporter in an extensive interview:

“Because I am a known conservative, it appears that I was deemed unfit to be the person to produce this miniseries,” Surnow says, breaking his silence on the controversy… “This is despite the fact that I'm American, and John F. Kennedy was my president as much as anybody else's president. I am a proud American, proud of the Kennedys for their accomplishments and their place in history, but none of that was given voice. I wasn't Emmy Award-winning Joel Surnow, I was Rush Limbaugh's and Roger Ailes' friend Joel Surnow. And that's all that mattered.”