VIDEO: Wally Pfister on Nolan, "Inception" and the beauty of celluloid 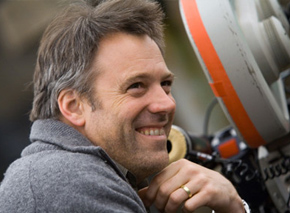 TFT Dean Teri Schwartz and Professor Bill McDonald, head of the School’s cinematography program, turned out during Oscar week 2011 to welcome one of the profession’s true superstars, Wally Pfister, to an exclusive screening and Q&A at the Bridges Theater.

A few days later, Pfister took to the stage of the Kodak Theater in Hollywood to accept the coveted Oscar statuette for Best Cinematography for “Inception.”

Pfister famously draws upon his background as a documentary and news photographer when creating the hyper-real imagery that writer-director Christopher Nolan favors — even when exploring elaborate dream landscapes in an SF epic such as "Inception."

Pfister has been a key collaborator with Nolan for over a decade, working with him six times, on all of his films except the micro-budgeted British debut, “Following” (1998). Their joint filmography is a roster of modern classics: “Memento” (2000), “Insomnia” (2002), “Batman Begins (2005), “The Prestige” (2006), “The Dark Knight” (2008) and “Inception” (2010). Pfister and Nolan are currently in pre-production on the next Batman adventure, “The Dark Knight Rises,” up to 50 percent of which may be filmed in the gigantic Imax format.

In the exclusive video segment below, Pfister discusses the evolution of his "telepathic" collaboration with Nolan and his stubborn loyalty to the medium of film — to shooting movies on strips of celluloid rather than as strings of ones and zeroes.