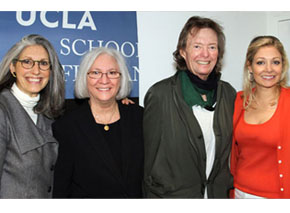 On the eve of the 2011 Academy Awards, Professor Deborah Landis, Founding Director of the David C. Copley Center, and Teri Schwartz, dean, UCLA School of Theater, Film and Television, welcomed Nadja Swarovski, head of communications for the company founded by her grandfather, along with donor David C. Copley, to the Billy Wilder Theater in Westwood for a daylong series of events dubbed “Swarovski Sparkles.”

In addition to a creative crystal workshop and an elegant presentation from Ms. Swarovski outlining the global scope of the firm’s activities, the centerpiece of the event was the panel discussion, assembled by noted costume designer Landis from among her distinguished colleagues and 2010 Oscar-nominees, costume designers Sandy Powell, Jenny Powell and Antonella Cannarozzi.

The topic for these eminent designers was, "In what ways has the art of costume design changed in 2010.” Check out the video below of some of the major highlights of the panel discussion!