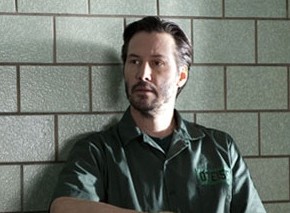 Here’s the official overview: Working the night shift as a toll collector on a lonely stretch of highway in Buffalo, New York, Henry (Keanu Reeves) is a man without ambition or a path, until his unwitting participation in an ill-conceived bank heist lands him in jail. His cellmate, con man and prison veteran Max (James Caan), is quite comfortable in his digs and full of worldly advice. Taking Henry under his wing, he teaches him that for a man to find his purpose, he must first have a dream. A year later, fresh out of jail, Henry finds that purpose.

Discovering a long forgotten bootlegger's tunnel, which runs from the very same bank that landed him in jail in the first place to a theater across the alleyway, he convinces the reluctant Max to file for his long-overdue parole – and help stage a robbery.

Their plan is simple: by infiltrating the theater and its current production of Chekhov's “The Cherry Orchard,” the unlikely duo will buy just enough time to dig their way to the adjacent bank vault and drive off with their loot. There is just one glitch: for the plan to work, Henry, who has never stepped foot on a stage in his life, must take the lead role in the play, opposite mercurial leading lady Julie (Vera Farmiga). A force to be reckoned with, she is as shocked as he is when the two find themselves falling in love. Henry is also surprised to find himself enjoying his new-found role as an actor. But when the big heist falls on the same day as Opening Night, Henry will have to decide where his path really leads.

Gervasi directed the popular documentary “Anvil: The Story of Anvil,” which won the top music doc prize from the International Documentary Association in 2008. He held the Lew and Pamela Hunter/Jonathan and Janice Zakin Chair in Screenwriting at TFT during the 2009-2010 academic year.