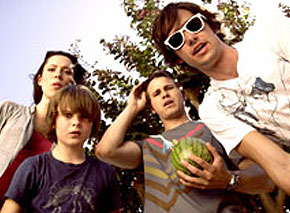 Created in 1987 in Austin, Texas, as a festival devoted mostly to local and emerging music, SXSW ("South by Southwest") has since added films and interactive media to its "Texas-sized week" of Spring arts festivals.

A major TFT-related event at SXSW 2011 was a special midnight screen of "Red Riding Hood," the newest romantic/erotic fantasy thriller from alumna Catherine Hardwicke. With a strong cast headed by Amanda Seyfried and Gary Oldman, the film promises to do for werewolves what Hardwicke's moody "Twilight" did for vampires.

Additional clips from IndieWIRE’s extensive interview with the director can be found here.

“A full complement of buyers” turned out,” according to “Variety,” for the world premiere of "A Bag of Hammers," a first feature directed and co-written by TFT theater alumnus Brian Crano '02. The stellar indie cast includes Jason Ritter and Rebecca Hall, in what is described as "an offbeat comedy about two misfit best friends incapable of growing up."

Two current 3rd-year MFA directors will be joining alums Hardwicke and Crano in Austin to present short films they made at TFT: Eric F. Martin presents "Fran's Daughter" (in which a "woman learns she may have been switched at birth") and Lucas Mireles appears with "Love Analysis" ("Give me one good reason to date your sister")