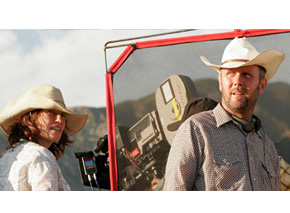 The Los Angeles Times reports that the Oscar-nominated alumni co-directors of “Little Miss Sunshine,” Jonathan Dayton ’80 and Valerie Faris ’80, have a new project in development with that film’s producers, Albert Berger and Ron Yerxa.

Both duos were honored at TFT’s Festival of New Creative Work in 2007. Dayton and Faris were saluted as Filmmakers of the Year and Berger and Yerxa received the UCLA School of Theater, Film and Television and Producers Guild of America Vision Award.

The Times says "Paul Dano, who starred in the road-trip hit, is set to star in a film called 'He Loves Me' that’s written by and will co-star his real-life girlfriend, Zoe Kazan."

“He Loves Me” tells of a young novelist who achieves success early in his career but begins to face struggles. In a bid to overcome writer’s block, he is told to write the woman he thinks will love him. He winds up willing her into existence. (Think “Adaptation” meets “Weird Science.”)

Reached by phone, Berger said that there were plenty of commonalities in tone, if not in story, to their earlier hit. “The plot couldn’t be more different than ‘Little Miss Sunshine,'" he said. “But in terms of a movie with comedy, with heart and with strong characters, I think it’s very similar.”

And there’s this: Dano will play a tortured soul not unlike his Nietzsche-loving teenager from “Sunshine.”

Dayton and Faris met at UCLA, where she was studying dance and he film directing. They worked together for seven years after graduation before becoming a couple. After creating a show called “The Cutting Edge” for MTV the partners built their company, Bob Industries, into a powerhouse in the fields of music videos (REM, Smashing Pumpkins, Red Hot Chili Peppers) and commercials (VW, PlayStation, Guess).

Dayton and Faris have been mentioned in connection with several feature film projects since the breakout success of “Sunshine,” including an adaptation of the Tom Perrotta novel “The Abstinence Teacher” and "Will," a comic fantasy for Paramount starring Paul Rudd and Zach Galifianakis.