Hal Ackerman won the award of Best First Novel for “Stein, Stoned” at the Lovey Awards. 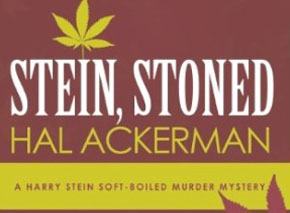 The winners of the Lovey Awards are announced at the Love Is Murder conference, an annual event where fans, writers, readers and professionals meet for intrigue and mayhem, enlightenment and encouragement. The Lovey Award recognizes excellence in several categories for books published during the previous calendar year.

Ackerman has been on the TFT faculty for the past 24 years and is currently co-chair of the screenwriting program. His book “Write Screenplays That Sell . . . The Ackerman Way” is in its third printing.

Harry Stein was a countercultural hero in the '60s, thanks to "Smoke This Book," his cult classic on growing weed. Now he's a small-time PI and hasn't smoked dope for six years, afraid of losing joint custody of his daughter, Angie. Then two cases bring his old life back to centerstage: He's hired to recover a marijuana grower's new crop, bound for the medical marijuana market but ripped off by unsavory types hoping to sell it on the street, and his regular gig providing security for a perfume company heats up when it appears a soon-to-be-launched shampoo has been pirated by the creator's former lover. Naturally, the two cases are intertwined, and soon enough Harry is helter-skeltering his way between L.A. and Amsterdam, trying to solve a murder, find the dope, and keep the shampoo out of harm's way. The plotting gets a little frenetic toward the end, but who cares? Harry fits comfortably into that delightfully comic line of slacker sleuths — a tradition that runs from the Fletch novels through Newton Thornburg's 1976 cult classic "Cutter and Bone" and, of course, "The Big Lebowski." The Dude abides with Harry Stein.