Best Actress winner for "Shaheed," acting alumna takes on Muslim homophobia in "No Word in Guyanese for Me" 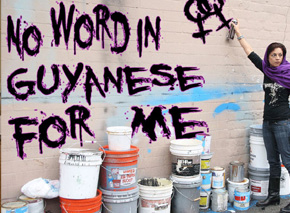 TFT acting alumna Anna Khaja '97 has won the 2009-10 Ovation Award for Lead Actress in a Play for her performance in "Shaheed: The Dream and Death of Benazir Bhutto." She wrote, performed and co-produced the play at the Stephanie Feury Studio Theatre in Hancock Park.

“Shaheed,” which depicts the events leading up to the 1996 assassination of the Pakistani Prime Minister, was also nominated for Best Production of the year and has traveled to several other national venues, including the New York City International Fringe Theater Festival.

In May Khaja will open at the Sidewalk Studio Theatre in Burbank in the world premiere production of a new play by Wendy Graf ("The Book of Esther"), "No Word in Guyanese for Me.” The new work follows Khaja's character, Anna, from her childhood in Guyana to her adolescence in pre- and post-9/11 New York, and from a disastrous arranged marriage to her sexual awakening, as she struggles to come to terms with her devotion to her faith and her family and fights for the right to be accepted for who she is.

In 2005, Khaja played a character referred to only as "The Academic" in the U.S. premiere of David Hare's "Stuff Happens" at the Mark Taper Forum (Ovation nomination). Her portrayal was so controversial that the Los Angeles Times published a special Opinion piece solely about her character and performance.

In 2007, Khaja originated the role of the Iraqi mother, Nerjas, in the US premiere of Canadian playwright Judith Thompson's "Palace Of The End," delivering a 45-minute monologue; for this performance she received the LA Weekly Award for Solo Performance and was nominated for a Lead Actress Ovation Award.

Khaja has performed at many Los Angeles theaters, including Open Fist, NoHo Arts Center and The Fountain. She first gained recognition on the big screen in "King of California," as the unyielding but vulnerable cop who faces off with – and eventually is seduced by – Michael Douglas.