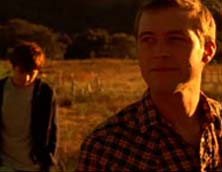 Alumni Alex O’Flinn MFA ’09 and Thouly Doios MFA ’06 have been invited to screen their films “Shoot The Moon” and “House of the Olive Trees” at LACMA’s Tenth Annual Young Directors Night. The event highlights the emerging talent of Los Angeles’ film community. A celebration of film and the art of cinema, the showcase features six to eight short films screened in the unique setting of an art museum followed by a conversation between the featured directors and the host panel.

Alex O’Flinn’s thesis film “Shoot The Moon” is about a boy named Tommy whose world is turned upside down when his older brother Victor returns home from the Marines and commits an act of violence.

Thouly Doios’ thesis film "House of the Olive Trees" (To Spiti me tis elies) is a 29-minute short that follows the story of Anna, a 30-year-old woman who lives a solitary life, free of emotional attachment. She is comfortable with the life, despite its pain, until she meets Markos, who threatens her firm sense of independence.