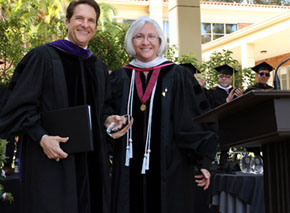 Peter Guber on the persuasive power of great storytelling

New book "Tell to Win" draws on the lessons of his work as a top film producer, popular TFT professor and leading motivational speaker

"The ability to move people emotionally is also the power to move them transactionally," says Peter Guber, veteran film producer and longtime TFT professor and Executive Board Member.

In high demand nationally as an entertaining and inspiring motivational speaker, in addition to his work as an educator and as the CEO of the company he created, Mandalay Entertainment Group, Guber has distilled the hard-won lessons of a lifetime into those popular talks and now into an engaging new book, "Talk to Win: Connect, Persuade and Triumph with the Hidden Power of Story."

"The aim,” he says, “is to empower the reader to tell emotionally resonant stories, in order to persuade, motivate, excite and incite others to your goal for success. Most importantly, how it provides the impetus for them to viral market your concept or product for you, because a good story is something people can’t wait to pass on. I’ve designed this book to be exciting and inspiring to read and also to deliver tools and takeaways that readers can use today to change their tomorrow.”

TFT Dean Teri Schwartz calls the book “a page turner – certainly as entertaining and galvanizing as Peter's talk at our 2010 Commencement, and totally grounded in the captivating concepts he presented that day.”

Guber began his ongoing exploration of the power storytelling at TFT in 2008. He taught a popular workshop course, "Navigating a Narrative World," which studied the different types of narratives that permeate our work and everyday lives. Participants learned how to find and create their own narratives. Many of the same concerns later informed his 2010 commencement address and the writing of "Tell to Win."

The wide variety of situations in which the power of narrative can be decisive is a cornerstone of Guber's message. "Whether you’re a manager, housewife, entrepreneur, lawyer or nonprofit," he recently told The Huffington Post, "you often must get someone or a group of people to do something – buy your product, adapt to your organization’s culture, invest in your vision, donate to your cause, meet a curfew – and embedding the call to action by telling purposeful stories, preferably in the room, face-to-face, is the most effective means of achieving that goal.”

To illustrate his claims about applying the power of purposeful storytelling to a wide variety of life situations, Guber includes the testimony of a diverse array of “voices” – master storytellers with whom he has shared turning-point life experiences.

“As you can imagine,” Dean Schwartz says, “Peter's amazing professional experiences have played a big role in the development of his theory of ‘tell to win,’ which he has successfully tested both in the classroom and in the boardroom. The stories and the people Peter chooses to highlight in his book dynamically bring to life his wonderful ideas and insights.”

Another key message is that often untapped persuasive power of narrative is available to all of us, even to people who do not see themselves as "natural storytellers."

"Everyone is a natural teller of stories," Guber has said. "The ability to tell purposeful stories for success isn’t a gift from me to you. It isn’t a special talent bestowed upon a select few. It’s hard-wired in all of us."

Guber ranks storytelling as one of the core attributes of human nature, as ubiquitous across all cultures as language itself:

"The telling of stories was critical to the survival of our species. In order to compete and triumph against far more ferocious predators we had to develop rules, beliefs, values and strategies. This meant the development of the ability to communicate, remember, and act upon the information embedded in stories told around the campfire. This social cohesion allowed us to move from the bottom of the food chain to the top – from prey to predator."

"Tell to Win" will be released on March 1 by Crown Business.

Among the award-winning films he has produced or executive produced are “Midnight Express,” “The Color Purple,” “Gorillas in the Mist,” “Batman” and “Rain Man.” Guber is the owner and co-executive chairman of the NBA’s Golden State Warriors and oversees one of the largest combinations of professional baseball teams and venues nationwide. He is also a longtime professor at UCLA, a Harvard Business Review contributor, and a thought leader who speaks at numerous business forums around the country.

I do hope you are all well and flourishing in this new year. So many exciting things are happening at TFT and we all feel our future is looking very bright – and that includes all of you being a part of everything we do!

In addition to our new vision and launching exciting new initiatives, one of the highlights of this past year was our very own TFT professor and Executive Board member, Peter Guber’s, 2010 Commencement Speech. It was a galvanizing talk about the power of story and the concept of “tell to win.” Peter truly inspired everyone in attendance from faculty, students, staff, parents, alumni and friends.

Since Commencement 2010, I’ve been asked on numerous occasions by so many of you about Peter’s amazing speech and how you can hear excerpts and access the concepts in his talk. I am happy to report to all of you that you now have a way to share in the experience we had at Commencement 2010.

And here’s how: Peter has written a remarkable book called “Tell to Win: Connect, Persuade and Triumph with the Hidden Power of Story,” which puts forth, in an inspiring, entertaining and thoroughly engaging way, Peter’s unique and special concepts about the power of story and how it can inform and transform our lives both personally and professionally. I’ve had the good fortune to read an early galley (I’m quoted in the book!) and it’s a “page turner” – certainly as entertaining and galvanizing as Peter’s talk at our Commencement and totally grounded in the captivating concepts he presented that day.

For those of you who are not fully familiar with Peter’s legendary career, he has been an executive, entrepreneur, producer, UCLA professor, TFT Executive Board member, and a friend to me, and all of us at TFT. His films, such as "Batman," "Rain Man," "Gorillas In The Mist," "Flashdance" and "The Color Purple," to name but a few, have earned over $3 billion at the box office. He was the Chair and CEO of Sony Pictures, Studio Chief at Columbia Pictures, Co-Chair of Casablanca Records and Filmworks, CEO of Polygram Entertainment and now Chair and CEO of his current venture, Mandalay Pictures Entertainment Group, which includes movies, television, music, new media and sports properties, including his recent purchase of the NBA Golden State Warriors.

As you can imagine, Peter’s professional experiences have played a big role in the development of his theory of “tell to win,” which he has successfully tested both in the classroom and in the boardroom. The stories and the people Peter chooses to highlight in his book really bring to life his ideas and insights. When you have the likes of President Bill Clinton, YouTube founder/CEO Chad Hurley, Steven Spielberg, Deepak Chopra, Pat Riley, Famous Amos cookies founder Wally Amos, Lynda Resnick of POM Wonderful, Fiji Water and Franklin Mint and many others revealing their approach to using the power of story to achieve their goals, you can’t help but absorb their wisdom and be entertained at the same time by their journeys to success.

Without question, Peter’s new book fulfills its promise to empower you on how to tell emotionally resonant stories to persuade and motivate others to your goal for success and, most importantly, how it provides the impetus for them to enthusiastically viral market it for you. The book gives you specific tools and takeaways that I found really compelling. And I think you will, too.

It’s fun to share the experience we had at Commencement 2010 with all of you. Here is Peter’s website where you can find additional information about Peter and his new book, which will be published on March 1, 2011, from Crown/Random House.

Kindly let me conclude by congratulating Peter on this outstanding accomplishment and thank him for his continued friendship and support of TFT.

I hope you all enjoy “Tell To Win”!