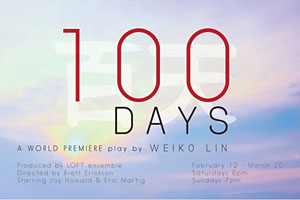 “100 Days,” a new play by TFT screenwriting alumnus Weiko Lin MFA '02, has its theatrical debut in Los Angeles in February at the LOFT ensemble in the Little Tokyo arts district. The engagement runs from February 12 to March 20 and offers two shows a week, Saturdays at 8 p.m. and Sundays at 7p.m.

Theater alumna Joy Howard '02, the artistic director of LOFT ensemble, has a leading role in this production, along with Eric Martig.

Previously developed in a staged reading in Chicago, the play was inspired in part by the death of the playwright's own mother, and is based on the Taiwanese tradition that if a parent passes away before his or her child is married, the child has just 100 days to find a spouse in order to ensure the transition of parent’s spirit to its final resting place.

The action centers upon a young man (Martig) who awkwardly reunites with his estranged and married high school sweetheart (Howard) after his mother's passing.

Recipient of a Samuel Goldwyn Writing Award, Lin's previous play "The Best Man," premiered at the David Henry Hwang Theatre in Los Angeles. As a Fulbright Senior Specialist, Lin has taught MFA courses at Taipei National University of the Arts. A member of the Dramatist Guild of America and Writers Guild of America-West, Lin is on the faculty at Northwestern University in the MFA “Writing for the Screen and Stage” program.