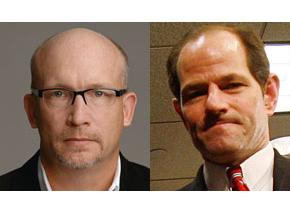 TFT alumnus Alex Gibney has been nominated for a Directors Guild of America award for his feature-length documentary “Client 9: The Rise and Fall of Eliot Spitzer.”

Gibney was nominated for the DGA award in 2007 for “Taxi to the Dark Side,” which went on to win the documentary Oscar.

“Client 9” looks behind the notorious sex scandel that brought down the popular Governor of New York to consider the possibility that Spitzer’s political enemies may have engineered his demise.

Known as “The Sheriff of Wall Street” when he was NY’s Attorney General, Spitzer had prosecuted some of America's largest financial institutions and their executives. Elected Governor by one of largest margins in New York history, Spitzer seemed poised to become the nation’s first Jewish President. So when reports emerged that her had been caught seeing prostitutes, his powerful enemies gloated.

With unique access to the escort world as well as to the friends, colleagues and enemies of the ex-Governor, Gibney explores the hidden agendas behind this classic tale of sex, power and human weakness.