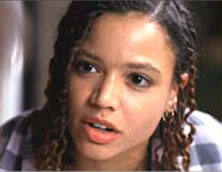 In the 2010-11 academic year, filmmaker Kasi Lemmons (“Eve’s Bayou”) taught a six-week master class, “Directing the Actor,” in which MFA theater actors and MFA film directors worked together on scenes from as yet-unproduced screenplays written by Lemmons.

Kasi Lemmons was born in Missouri and raised in Massachusetts, where she performed in Boston Children’s Theatre before studying acting at NYU and history at UCLA.

Lemmons attended Manhattan’s New School for Social Research where she made her first film, “Fall From Grace,” a short documentary about the homelessness. She continued to develop her writing and directing skills while working as an actor in a number of films, including “The Silence of the Lambs” (1991), “Candyman” (1992), “Hard Target” (1993) and “Fear of a Black Hat” (1993). In 1997, she appeared in the feature “Gridlock’d,” the directorial debut of her husband, actor-director Vondie Curtis-Hall.

Also in 1997, Lemmons wrote and directed “Eve’s Bayou,” a Southern Gothic drama about a girl growing up in Louisiana. With star Samuel L. Jackson as co-producer, “Eve’s Bayou” was a critical success, winning Lemmons an Independent Spirit Award for Best First Feature. She teamed with Jackson again in 2001 for the psychological thriller “The Caveman’s Valentine.”

Lemmons’ 2007 film, “Talk To Me,” was a biographical drama about Ralph Waldo “Petey” Greene Jr. (Don Cheadle), a soul music DJ who galvanized Washington, D.C., in a tumultuous period in the mid-1960s.