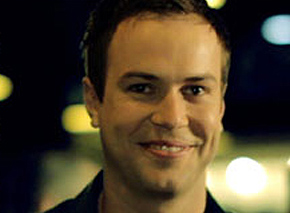 When he made his debut as a featured player this fall, TFT musical theater alumnus Taran Killam became the second Bruin to join the cast of “Saturday Night Live” in as many years, joining returning SNL sophomore Nasim Pedrad ’03 .

Killam is a Big Bear, Calif., native who has been performing professionally since the age of 12, when he made his movie debut in “Naked Gun 33 1/3: The Final Insult.”

Killam honed his comedy skills as a main company member of The Groundlings, and appeared in the show “Three Companeros” with the improv comedy troupe Upright Citizens Brigade, which also nurtured Pedrad’s career. In 1995, at 19, he become the youngest-ever cast member on “MADtv.”

Killam has appeared on the television programs “Jake in Progress,” “Still Standing,” “Boston Public,” “The Amanda Show,” “Drake & Josh,” “Do Over,” “Roswell,” “Judging Amy" and "Scrubs,” and in the feature films “Just Married,” “Big Fat Liar,” “Epic Movie” and “My Best Friend's Girl.”