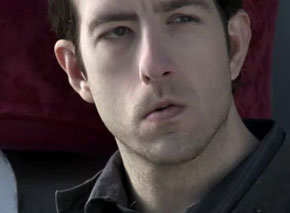 The CINE Golden Eagle Awards are given for excellence in professional, independent and student filmmaking and are recognized internationally as symbols of the highest standards in film and television production.

Since its founding in 1957, CINE has been dedicated to honoring emerging and established talent in film, television and new media. Bodie now joins a remarkable list of CINE Golden Eagle Award-winning filmmakers, and like Bodie, many of them received recognition from CINE early in their careers.

Ron Howard was a teenager when he won his CINE Golden Eagle; Robert Zemeckis, a film student; Steven Spielberg, a promising director; Mike Nichols, a young comic; Ken Burns, a budding documentarian; and John Lasseter, a pioneering animator whose Pixar Animation Studios was then in its infancy.

Bodie's film is now a nominee for the CINE Award of Excellence, given to CINE's top student film of 2010 (chosen from CINE's four student categories). The Award of Excellence will be presented at CINE's 2011 Awards Gala next spring in Washington, D.C.

We first wrote about “Sacramento “ when it was screened at AFI Fest in Los Angeles in October:

The 18-minute short film “Sacramento — A Family Fable” was a Spotlight-winning highlight of this year’s Festival of New Creative Work. Now the wry family drama is heading to the AFI Fest in Los Angeles, unspooling in Hollywood in November.

The film has been described as “creepy in the best possible sense.” It concerns Dan (Travis Richey), an anxious young man who returns home to retrieve his childhood pet dog — only to discover that the dog is dead. And that’s the least of his worries.