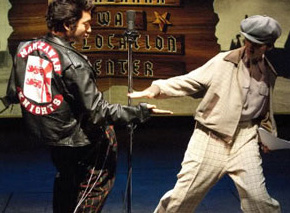 TFT alumnus Daisuke Tsuji '03 is enjoying a wide-ranging, hard-working season this year at the Oregon Shakespeare Festival in Ashland, appearing in the new plays “Johnny and Ensemble in American Night” and “Traveler” and as Francis in “Henry IV, Part One.”

Tsuji said he “ran away to join the circus” shortly after graduating from TFT, joining the Montreal-based “Cirque du Soleil,” where he spent several years as a featured performer, billed as the Public Clown in the production “Dralion.”

He returned to Southern California in 2009 for the co-written show “Death and Giggles & Sole Mate” at Actor’s Gang, interacting with the “found object puppetry” of two classmates, Cristina Bercovitz ’05 and Shannon Kennedy MFA ’05.

PHOTO: Johnny (Daisuke Tsuji, left) and Ralf (Stephanie Beatriz) as performers on a Manzanar radio broadcast in the play “American Night: The Ballad of Juan José” at the Oregon Shakespeare Festival. Photo by Jenny Graham

Tsuji was a founding member of the edgy comedy ensemble “N*gger Wetb*ck Ch*nk,” appeared in the Clint Eastwood film “Letters From Iwo Jima” and played Scooter Boy in a production of “Meditations on Virginity” at the National Theater in Warsaw.