Payne's next is about "Wilson" 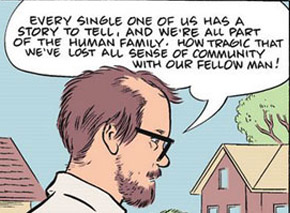 EXCLUSIVE: Fox Searchlight has made a deal for “Wilson,” a Dan Clowes-created graphic novel that the author will adapt as a potential directing vehicle for Alexander Payne. Payne’s Ad Hominem will produce with Josh Donen, on behalf of Sam Raimi’s Stars Road.

“Wilson” tells the story of an opinionated middle-aged loner who loves his dog and maybe nobody else and who begins a quest to find human connection with his ex-wife. You know that can’t end well.

Clowes adapted his graphic novel into the Terry Zwigoff-directed “Ghost World,” and his comic creations include the anthology “Eightball.” Clowes turned one of those stories into the 2006 film “Art School Confidential,” which Zwigoff also directed. “Mr. Wonderful,” the next graphic novel by Clowes, will be published by Pantheon next April.

“Hung,” the series Payne co-created for HBO, has been renewed for a third season that begins in 2011.