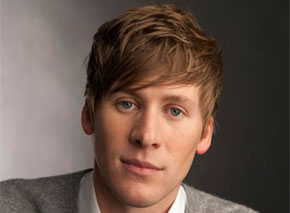 “Coming off 'Milk,'” says Oscar-winning TFT screenwriting alumnus Dustin Lance Black ’96, "J. Edgar Hoover was someone I really wanted to investigate. To me, he seemed the very opposite of [martyred gay activist politician] Harvey Milk: a man with tremendous political power, but intensely closeted when it came to his personal life.”

Hoover was a complex and compelling figure whose self-created legend as a gangster hunter captivated America in the 1930s. Both feared and revered, the man was a dichotomy whose public and private lives would spark rumor and innuendo. But thanks to his eternal secrecy, the question of who he really was remains largely a subject of speculation to this day.

Clint Eastwood, the director of "J. Edgar," the Hoover bio-pic Black crafted, grew up during his reign, was intrigued by the chance to explore Hoover on film. Along with Black, producer Brian Grazer and actor Leonardo DiCaprio, who plays the title role, Eastwood met the press recently in Los Angeles. His colleagues credited Black with the most critical skill a Hollywood screenwriter can have: the ability to sculpt complex material into exciting relatable stories that make other top artists want to sign on as collaborators.

“Hoover was a top cop, or a top 'G-Man,' as they called them in those days," Eastwood recalled, “but I didn't really know much about him. He had a high profile – he was seen with movie actors and famous writers at social gatherings and what have you – but he was an enigma in many ways.” Therefore, when the screenplay for “J. Edgar” crossed his desk, the filmmaker says, “I was already curious, especially about how Lance had approached it. It was really a character study. I liked the story a lot.”

The film's star, Leonardo DiCaprio, agrees. “Lance wrote this incredible screenplay that both Clint and I were attracted to instantly. Hoover has always been this mythic, iconic figure in American history, yet somewhat shrouded in mystery in both his political and personal life. To tackle his life story seemed daunting, and Lance did it in such an emotionally moving way.”

The project came to Black through veteran producer Brian Grazer, who had worked with Eastwood once before and was eager to do so again. "I wanted to do a movie about J. Edgar Hoover – not a documentary, but an actual feature film," Grazer relates. "I was interested in the power and corruption that existed in his world, much of it of his own making, in spite of his being such a dedicated patriot."

Black and Grazer settled on a few key points on which to center the film, including the Lindbergh kidnapping and the formation of the Federal Bureau of Investigation. "I really wondered how this man, who started out with the best of intentions and went on to create the FBI and bring down some of the country's most iconic gangsters, became so paranoid and, by some accounts, diabolical," Grazer says.

Black notes, "My initial research labeled him either a hero to the nation, to whom we owe everything in terms of our protection and safety, or a villain who did things in an underhanded manner and was a terror to the country. It all seemed so extreme; I thought the truth had to lie somewhere in between."

Grazer agreed with that conclusion, and with the writer's idea to "present it from an internal point of view, from Hoover's own psyche, letting him tell the story as he remembers it," the producer says.

“This is a story about relationships,” director Eastwood says, "intimate interactions between Hoover and everyone around him, from those closest to him – Clyde Tolson, Helen Gandy, his mother – all the way to Robert Kennedy and other well known political figures, even presidents. If it had just been a biopic, I don't think I would have wanted to do it. I like relationship pictures. I like exploring why people do or did certain things in their lives.”

“This was one of the most challenging characters I'd ever seen on the page," DiCaprio says of Black's script, which spanned Hoover's entire professional life, beginning with the Bolshevik invasions in 1919, when communism was arriving on American soil. "Communism was almost like a terrorist movement in Hoover's eyes, and he battled it and other perceived enemies throughout his career. Lance analyzed him as a young man and an old man, critiquing him in every possible way.”

Producer Robert Lorenz felt that the subject was a particularly fascinating one because, as he remarks, "What most of us know today is basically hearsay. This was a chance to put him in context; to attempt to understand what motivated his actions, without defending or judging everything that he did; to show that he was a complicated man, not a one-dimensional individual."

In addition to reading almost everything that had been published on Hoover, Black set off to track down as many firsthand accounts as possible from those few people still living who had known him. He filled in the picture with information from others who may not have known the man personally but lived in Washington, D.C., during his period in office, in order to get a full picture of him, the good and the bad.

Proving the axiom that history tends to repeat itself, the filmmakers found Black's story of J. Edgar Hoover very timely, despite the fact he died nearly 40 years ago.

"One of the aspects of the script that was very appealing was the fact that it was about a guy who was really working to manipulate the media, and had a very shrewd ability to do that," Lorenz observes. "In this age, when people are constantly trying to shape their images and are having to fight an uphill battle against the fast pace of technology, I think it's fascinating to look back at how Hoover did it, and how he managed to keep so many things secret in his private life and his work. That type of privacy would be difficult, if not impossible, today, and was certainly one of the more intriguing aspects of making the movie."