Hardwicke and Richardson under the "Riding Hood" 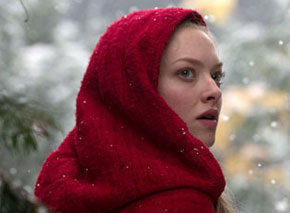 IndieWIRE reports that TFT alumna Catherine Hardwicke and her longtime editor, alum-turned-professor Nancy Richardson MFA '96, have been “sequestered in the editing room with [their] $42-million Gothic twist on Red Riding Hood, starring Amanda Seyfried as a ‘naughty,’ not-so-little woman with a red cape who tangles with a werewolf.”

The trailer hits theaters this week, attached to “Harry Potter and the Deathly Hallows.”

Hardwicke told the Los Angeles Times about a song created for the movie by the Swedish band Fever Ray: This Red Riding Hood, really, like the original, is a bit naughty. Good girls don't talk to werewolves. She's kind of wild, she's coming into her own. Back in medieval times, Victorian repression hadn't come in yet. People were bawdy and wild and more in touch with their true natures. If you look at the Bosch paintings or Bruegel, you see when people are dancing they're totally cutting loose. I have a scene that feels like Burning Man, which of course was itself inspired by medieval scenes of burning effigies. In the film, the town feels like they've conquered the wolf. They feel justified in celebrating. They build this giant wolf effigy, a huge bonfire, everyone's dancing like crazy and partying and going wild, so I used the Bosch painting “The Garden of Earthly Delights” as my inspiration for that. We built all the instruments in the Bosch painting, a hurdy gurdy, standing horn pipes, the same blue drums. We commissioned this band from Sweden called Fever Ray. She's always performing in radical costumes, she's like the Lady Gaga of Sweden. In our movie she's wearing a harvest mask with a corn husk face and she's singing and everybody's dancing and singing. Of course it all goes to hell soon enough but it's fun for a while. ... Karin [Dreijer Andersson], the leader of the band, collaborated with our composer Brian Reitzell to create this song that you see musicians performing live in the movie with the Bosch instruments. I loved it cause it was haunting. I felt like it was ancient, but edgy and modern.