"I absolutely love it. I think it's always a dream for an actor to play a bad guy." 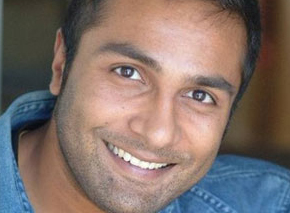 TFT acting alumnus and former Visiting Assistant Professor Kahlil Joseph MFA ’06 had been a working actor in theater, film and television in Hollywood for several years. His current gig, portraying the nefarious Professor Callahan in the national tour of the hit Broadway musical “Legally Blonde,” will take him to almost every state in the U.S. and several cities in Canada over a period of 10 months.

“It is a huge production that has received great press,” he says.

Interviewed by Columbus, Ohio’s “UWeekly,” Joseph was asked to account for the durable, huge popularity of both the film and stage versions of this story:

“I think it’s the fact that it’s sheer fun. The story is incredibly fun (and) the character [of Elle Woods] is very lovable, even though the audience gets to laugh at her many, many times. I think the appeal is that it doesn’t take itself too seriously, even though there is a serious story and she is a kind of underdog in her own way,” said Joseph.

Joseph added that there are important lessons to be learned, even though the story is presented through comedy. While characters within the story may see Elle Woods as blond and therefore dumb, the fact that she can overcome a stereotype and prevail is a character the audience can appeal to.

Joseph has worked in theater, film and television, including appearances on such programs as “Leverage,” “Castle” and “Desperate Housewives.” Additionally, while he has played the villain role on a television series in India, he feels that Callahan is a much different type of bad guy – one that is very cunning and much more devious and calculating. He feels a lot of charm needs to come with the character.

“I absolutely love it. I think it’s always a dream for an actor to play a bad guy. I feel there’s so much more fun to playing someone twisted and trying to still find the humanity in the character,” said Joseph. “It’s such a well-written role – it’s witty, it’s sharp… [and] the songs he has are excellent and the arch of his character, what he ends up to doing to Elle is something the audience, I think, doesn’t see coming.”

He added, “He’s a very intelligent, smart bad guy, which I think makes it something fun for me to play.”

Something refreshing about this production is that it’s what some see as a new era of musical theater. When the cast breaks into the musical numbers it is not a departure from the scene, but the lyrics carry over into the songs and further the story through the choreography.

“I think when it comes down to the musical there are tons of fabulous songs and dances … there’s a lot of narrative going on in the songs, compared to some other musicals,” said Joseph.

“Audiences, they are definitely going to walk away with a sense of (being uplifted, which I think is very important. I think they’re going to walk away with learning something new about the fact that even for someone, a character who's very rich, that would be Elle Woods, we may think [of her] stereotyped to the point of hurting her chances for advancement. We never want to judge a book by its cover, and the story definitely tells people if they try hard enough, (they are) going to do well and I think that’s something a new audience would walk away with at the end of the night,” added Joseph.