Second to none: David Martin-Porras, Julio Ramos, and Amy Adrionaaaaaaaaa 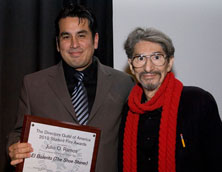 TFT made another strong showing this year at the Directors Guild of America’s annual Student Film Awards.

The School swept the Latino category, Western region, with David Martin-Porras MFA ’09 the winner for “La Viuda” (“The Widow”) and Julio O. Ramos picking up the Jury Award for “El Bolerito” (“The Shoe Shiner”). (Martin-Porras was unable to attend; the award was accepted by the producer of “The Widow,” Maria Cervera.)

The Jury Award in the Woman category, Western Region, went to Amy Adrion MFA ’09 for “ Shoegazer.” 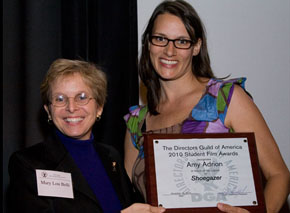 Each year since 1996, the Directors Guild of America Student Film Awards for African-American, Asian-American, Latino and women filmmakers have been announced. They bring the winners prizes of $2,500 and are designed to honor, encourage and bring attention to outstanding minority and women film students in film schools and other select universities.