Classic cinema and digital innovation are hallmarks of his long career 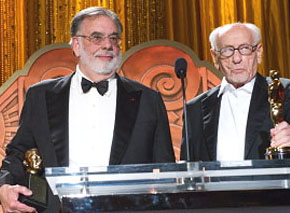 The award to the director was presented by Coppola protege George Lucas, who called him the “Godfather of a generation that changed the course of motion picture history.”

In his acceptance speech, Coppola said, “I have a great love of the original Hollywood tradition and admiration for the tradition of Irving Thalberg.”

Thalberg was a legendary mogul of the 1930s who became head of production at Universal at the age of 20. The Thalberg Award is presented to “creative producers whose bodies of work reflect a consistently high quality of motion picture production.”

Coppola was honored both for the many classic films he wrote (“Patton”) and directed (“The Godfather,” "Apocalypse Now”) and also in recognition of his work as a groundbreaking independent producer at his San Francisco-based company American Zoetrope.

In recent years, Coppola has taken the concept of the independent filmmaker to new levels, using the income from his hugely succesful wine and food businesses to fund personal productions such as the autobigraphical drama “Tetro” (2009).

Variety put the award in context:

In 1978, as he stood at the podium to present the Oscar for directing, Francis Ford Coppola took a moment to talk to the incipient digital age and the “communications revolution” that was about to transform the movies.

Bewildered co-presenter Ali McGraw was wide-eyed, and the next day some critics snarked about the interruption.

“Francis has always jumped enthusiastically with both feet into the future, and that has to some extent determined how the future turned out,” remembers his frequent collaborator, Walter Murch.

Murch’s credits on Coppola titles go from sound to picture editing to screenwriting. That reflected a larger effort to make professional filmmaking more like the filmmaking Coppola and his friends had experienced at film school, where people were encouraged to try different jobs and not be pigeonholed to a single task or function.

“He wanted everyone who worked with and for him to realize their maximum potential,” says Murch. “We were always being encouraged to write screenplays and investigate all the different aspects of filmmaking, because until you’ve tried it you never know where your talents lie.”

As a result, Murch has worn many hats for Coppola. On “THX 1138,” he was hired to do sound editing and mixing, but wound up working with George Lucas on the screenplay. On “The Conversation,” Coppola asked Murch to switch from sound to picture editing, and later he asked Murch to work with Carroll Ballard writing the first draft of “The Black Stallion.” (He did not receive a writing credit on the pic.)

By the time Coppola took to that podium in 1978 to talk about the coming tech revolution, he had been experimenting with digital filmmaking tools for a decade, remembers Murch.

“The first time I met Francis was in 1968,” Murch says. “I was cutting commercials at Haskell Wexler’s company in L.A. And he and George Lucas came by and said, ‘Come with us just up the street — we’re looking at this new computerized editing system.’

The CNX 2Memorex system had a lousy black-and-white picture and could only work on five minutes of footage at a time. “But George and Francis and I looked at each other and said, ‘This is it! This is the future,’" Murch says. “We thought by 1973, this will be everywhere. Well, it wasn’t, but in the early ’70s we were already thinking, ‘How can we make this work?’ We could see it happening; we just couldn’t see exactly how it was going to happen.”

Paramount turned down Coppola’s proposal to use a digital non-linear editing system on “The Godfather,” but he was undeterred. Murch recounts a wide-ranging list of tech breakthroughs pioneered by Coppola: “He was the first person to start using video taps off the camera on ‘One From the Heart’ back in 1980. That obviously has become completely entrenched in the way we make films now, almost to a fault.”

On “Apocalypse Now,” says Murch, there were multiple breakthroughs. By fusing quadraphonic with conventional theater sound, they more or less created 5.1, mixing in a specially designed studio. They used a video editing system to previsualize the long dissolves in the first reel while the main picture editing was done on Movieolas and flatbeds.

“He loves to stir the pot and to make things happen,” says Murch, “when things are in danger of following the conventional lines of demarcation.”