Smith's "16" in near sweep at Wild Rose indie fest 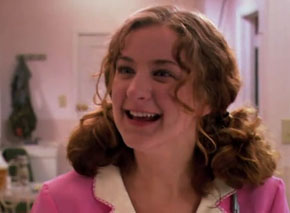 The Des Moines Examiner reports a near sweep of the highly regarded local Wild Rose Independent Film Festival by "16 to Life," a "nutty and charming coming of age picture" that is the first feature film directed by reality TV award winner and ace TFT professor Becky Smith. [The film] announced itself early on with a surprising win for Cinematography for Quyen Tran.

Things got quiet for “16 to Life” for a while – and then it began a late-in-the-game press, with Theresa Russell winning Best Supporting Actress for what is, to this reviewer's mind, some of the best work of her career; certainly, it's a stretch to remember her ever appearing so vulnerable onscreen.

News in this category stayed good: “16’s” Mandy Musgrave and Emily Foxler had also been nominated here, with Foxler finally sharing the runner-up prize with “Something Blue's” Bridget Flannery.

Becky Smith, director of “16 to Life,” won the Feature Directing prize, over the likes of Scott Thompson (who has directed 40 – that's four-zero – feature projects); hugely talented Justin Eugene Evans, who helmed “Lonely Place;” and the eventual runner-up, veteran (and, for some, best-kept-secret) Henry Jaglom, who brings a load of indie cred – if not widespread acclaim – to the table with “Queen of the Lot.”

And it didn't stop there. If every Awards show has an upset, then 2010 Wild Rose's was “16 to Life” topping “Queen of the Lot” and “A Lonely Place for Dying” in the Best Feature category. (There was yet one more for “16” – Best Iowa Film, though by that point, it seemed almost like a by-the-way.

Here's the trailer for the movie: