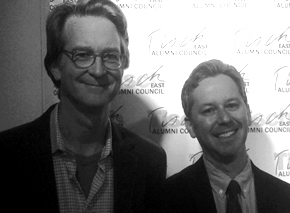 TFT’s screenwriting program is so famous for nurturing top-notch talent that even rival institutions recruit its graduates as expert witness.

Most recently, NYU and Columbia teamed up to present a colloquy between Hollywood’s most successful scribe, David Koepp ’90 (“Spider-Man”), and Neil Landau ’85 (“Don’t Tell Mom the Babysitter’s Dead”), a TFT screenwriting professor and the author of the well-reviewed recent book “101 Things I Learned in Film School,” from which the event drew its name.

Koepp talked about his experiences working on Steven Spielberg’s “Jurassic Park,” David Fincher’s “Panic Room” and other films, and his directorial credits, including the forthcoming “Premium Rush.”