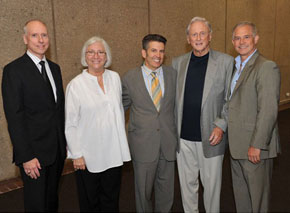 In her opening remarks, Dean Schwartz called the Goldwyns “one of the most respected awards programs in the entire field of entertainment.” Open to all students in the University of California system, the awards were founded by Samuel Goldwyn Sr. in 1955. With a roster of past recipients that includes filmmakers Allison Anders, Carroll Ballad, Francis Ford Coppola and Colin Higgins, and bestselling novelist Jonathan Kellerman, the Goldwyns have a track record that is second to none.

“We did a little research recently,” Goldwyn said, “and found out that 80 percent of past recipients of this award are still working in film and television.”

First Place: “Paint It Black” by Meg Gifford, UCLA. Four siblings are being raised to fulfill their parents’ own desires for success until a hippie neighbor moves in and introduces the kids to a world their parents never wanted them to see.

Second Place: “Burnt Bridges of Cartwright” by Branden Cahn, UCSB. A dramatic comedy about a timid son, an apathetic father and a kooky grandfather who try to re-establish a relationship that never really existed in the first place.

Third Place: “Hit and Run” by Owen Donavan Yarde, UCLA. An irreverent meditation on the meaning of life in the face of death, the story of how Mickey Kalligheri becomes a hit man without really trying. 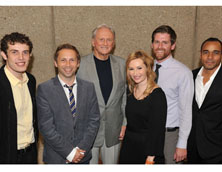 1st Honorable Mention: “How To Leave Your Lover” by Matt Wheeler, UCLA. James Langford is under pressure to marry his college sweetheart, Kirsten, but realizes he wants to end their 10-year relationship instead. He tries to break up with her without breaking her heart, but hilarity ensues when his various attempts go awry.

2nd Honorable Mention: “Short Stories” by Ryan Finnerty, UCLA. The gritty tale of a homeless junkie who attempts to turn his life around for the woman he loves and avoid going back to prison.