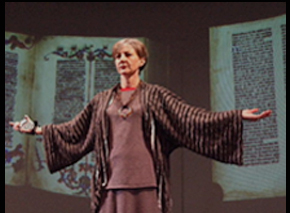 The stage pictures presented in the current Theatre @ Boston Court production “Futura” (recently extended to Nov. 14) have won raves for the set designs of TFT professor Myung Hee Cho and for the projections created by one of her students, Hana Sooyeon Kim.

“From scholarly lecture to futuristic nightmare,” notes the Los Angeles Times, “‘Futura’ … is an incisive treatment of the effect of electronic media on the human brain that segues into a dark vision of how such media can play into the hands of totalitarian despots. “Myung Hee Cho's set design, beautifully lighted by Jaymi Lee Smith, starts off with a bare stage and ends with a subterranean repository that is magnificent. Hana Sooyeon Kim’s projection design and John Zalewski’s sound are also crucial components.”

“the production regains life at the end, thanks in large part to set designer Myung Hee Cho’s beautiful rendering of the room where the Professor’s ‘zero drive’ has been kept hidden from the rest of the world. By the time we get here, only two of the play’s characters are still with us. But now, in this final scene, in these surprisingly enchanting and magisterial surroundings, Harrison and the pair of remaining actors effectively kindle our belief that the suppressed arts of reading and writing may win out over the forces arrayed against them.”

And according to Backstage,