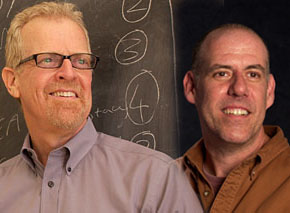 Caldwell and Kelly -- "A Night to Honor Teaching"

Introduced in 1961, the Teaching Awards aim, in the words of the official citation, to “increase awareness of UCLA's leadership in teaching and public service by recognizing teachers for their achievements. The award gives UCLA an opportunity to demonstrate to the community, alumni, students, parents, donors and others what makes UCLA a beacon of excellence in higher education.”

Caldwell is the producer/director of the award-winning documentaries “Freak Street to Goa: Immigrants on the Rajpath” (1989), a film about “the migratory pattern of ‘hippies’ in India and Nepal,” and “Rancho California (por favor)” (2002), a troubling look at migrant camps that house indigenous Mixteco workers within the arroyos of Southern California's most affluent suburbs.

For his film and video productions, Caldwell has also received fellowships and awards from the National Endowment for the Arts (1979, 1985), Regional Fellowships (AFI/NEA, 1985, 1988) and state arts councils (1984, 1985, 1989). His films have been screened in museums and festivals around the world and have been broadcast on SBS-TV Network/Australia, WTTW-Chicago, WGBH-Boston, WNED-Buffalo and WEIU-TV-Illinois.

Rory Kelly is an independent filmmaker whose first feature, “Sleep With Me” (1994), starring Eric Stoltz, Meg Tilly, Parker Posey and Craig Sheffer (and with a memorable cameo by Quentin Tarantino), had its world premiere as an Official Selection at Cannes and its North American premiere as a Gala Screening at the Toronto International Film Festival. It also screened at the London, Flanders, Seattle and Boston International film festivals and was distributed by United Artists.

In addition to teaching at UCLA, Rory Kelly is a tenure-track assistant professor in the Film and Electronic Arts Department at California State University, Long Beach, where he is the producer and co-artistic director of the WideScreen Film Festival. He developed an Artist-in-Residence program for the festival, which he founded in 2002 with Steven Spielberg.

Kelly has co-written and plans to direct a new feature film called "The End of Something" in 2011.