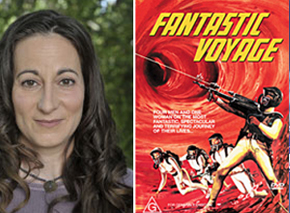 According to The Hollywood Reporter, TFT screenwriting alumna Laeta Kalogridis MFA '94 is set to work again with visionary director James Cameron. This time the “Avatar” collaborators will be charting a journey to inner rather than outer space. Kalogridis, who worked with Cameron on Avatar, has been tapped for rewrite duties on Fox’s remake of the 1966 sci-fi classic that Cameron is producing.

Voyage revolves around a team of scientists who are shrunk to atomic size and sent in a miniature submarine inside the body of a scientist to save his life.

Cameron is producing with his Lightstorm Entertainment partner Jon Landau.

Kalogridis, who wrote "Shutter Island" for Martin Scorsese, was involved in the writing of Avatar, for which she received an executive producer credit.
The WME-repped scribe is adapting the manga and anime classic "Ghost in the Shell" for Avi Arad and DreamWorks and rewriting "Nine Lives" for Jerry Bruckheimer and Disney. She sold an original pitch to Legendary, with Rae Sanchini, Thomas Tull and Jon Jashni producing.