TFT's Jeff Burke and the $7.9M project to reboot the Internet 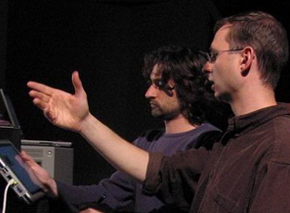 The transmission of the first message over the Internet took place at UCLA in the fall of 1969. Now UCLA and TFT will be in the forefront of efforts to develop a more efficient and robust Internet that can meet the challenges and opportunities of the 21st century.

The National Science Foundation’s Directorate for Computer and Information Science and Engineering has awarded $7.9 million to a team of researchers, led by UCLA, to carry this effort forward.

A principal investigator on the project will be Jeff Burke, TFT’s Director of Technology Research Initiatives and executive director of the UCLA Center for Research in Engineering, Media and Performance (REMAP).

“[Our] research integrates cultural, social and engineering objectives. We are interested in applications that are both expressive and functional.” — Jeff Burke

Lixia Zhang, a professor of computer science at the UCLA Henry Samueli School of Engineering and Applied Science, and Deborah Estrin, director of the UCLA Center for Embedded Networked Sensing (CENS), will collaborate with Burke on the project.

“The future of the Internet is integral to the future of creative expression and civic engagement,” said Teri Schwartz, dean of the School. “I am excited that REMAP’s participation will bring storytellers into a significant and productive collaboration with engineers and computer scientists.”

“The NDN project exemplifies the extraordinary potential for interdisciplinary research at UCLA,” Schwartz said, “and demonstrates the proactive role that great film and theater institutions should play in developing fundamental next-generation technology.”

However, after 40 years, the network has experienced exponential growth, evolving into a system of hundreds of millions of computers and hundreds of thousands of networks used by almost a quarter of the world’s population. And importantly, large numbers of Internet-connected devices have become mobile, losing their fixed “where” addresses. Many applications increasingly focus on content accessed independent of a single host location. The host-based communication model of IP is beginning to show some inherent limitations and constraints.

Named Data Networking will replace the ‘where’ — addresses and hosts — with ‘what,’ the content that users and applications care about. By naming data instead of locations, the new architecture transforms data into a first-class entity.

NDN will offer several new opportunities for exploration. With regard to security, for example, instead of the current one-size-fits-all model of armoring the channel between two IP addresses, NDN will allow all data to be secured end-to-end, and the data’s name will provide the essential context for security. Communications security will no longer be divorced from the data it secures. Named Data Networking will be able to tell if the data on a Web page was actually produced and signed by the owner of the site, similar to one’s bank. IP does not have that capability.

Today’s applications are conceived in terms of what information one wants but still must be written to consider on the specific devices on which the information is located. This means that several buffering layers if intermediate “middleware” must be added, such as the elaborate GUI (Graphic User Interface) applications that makes the operations of both Mac and PC computers seem intuitive. With NDN, the application’s ‘what’ model can be implemented directly, removing all the middleware and its associated configuration and communication inefficiencies.

Burke and his colleagues will be leading the effort to develop and deploy prototype applications to exercise and test the new architecture.

“REMAP has been exploring the use of named data at the application networking level since 2002,” Burke says, “when we realized it would help us organize and develop distributed applications that incorporated sensors, media and automation of the physical environment. The NDN project is very exciting, as it makes a more sophisticated and comprehensive version of this idea fundamental to the network itself.”

Burke, along with collaborators at UCLA and the University of Illinois at Urbana–Champaign, will consider a broad range of future applications to inform the network architecture. Prototypes built at REMAP and UCLA’s CENS will focus on three high-impact areas: streaming content distribution; media-rich, instrumented environments (often called “smart buildings”); and participatory sensing on mobile phones.

“REMAP’s research integrates cultural, social and engineering objectives; we are interested in applications that are both expressive and functional,” adds Burke. “This is crucial to understanding future network applications, as the Internet has become integral to not just commerce but our social and creative lives.”
There will also be an educational and outreach component to the project. Materials to teach “architectural thinking,” integrated with NDN-enabled research, will be developed, encouraging students to view networking in new ways. Graduate students will be involved in core research and thesis work, and a summer internship program for traditionally underrepresented undergraduate students will be created.