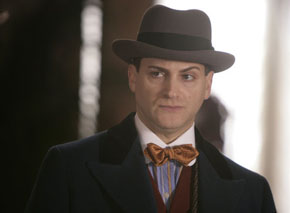 TFT acting alumnus Michael Stuhlbarg, who played the title role in the Coen Brothers’ Oscar-nominated 2009 drama “A Serious Man,” is again winning rave reviews — this time for his blood-chillingly mild-mannered portrayal of ruthless mobster Arnold “The Brain” Rothstein on the new HBO series “Boardwalk Empire.” A New York City crime boss, probably still best known for having fixed the 1919 World Series, Rothstein is also noted by historians as the man who put the organization in organized crime, striving to maximize profits during the gangster gold rush that was Prohibition.

Stuhlbarg argues that Rothstein’s success was due as much as anything to his self-control, his ability to think clearly under stress.

Rothstein's eschewing of liquor has nothing to do with Jewish prohibitions against drunkenness and “everything to do with his wanting to have a clear head and to take advantage of others whose heads are not so clear,” Stuhlbarg, 42, said in a phone interview from his Manhattan home. “He's giving the others the knowledge that he will always be on point, and he will not let alcohol fog his vision in terms of what he's come to accomplish.”

Stuhlbarg was hand-picked by the show's executive producer, Martin Scorsese, to play the Jewish kingpin — aka The Brain, Mr. Big, The Fixer, The Man Uptown and The Bankroll.

The series' timeline begins just months after Rothstein allegedly helped fix the 1919 baseball world series, and his notoriety inspired such fictional characters as Meyer Wolfsheim in F. Scott Fitzgerald's “The Great Gatsby.” Rich Cohen's book “Tough Jews: Fathers, Sons, and Gangster Dreams,” describes Rothstein not only as the Moses of Jewish gangsters but also as the founding father of American organized crime, the man who transformed the work of a bunch of thugs into a corporate system and who first saw a business opportunity in Prohibition.

Rothstein, Cohen wrote, "understood the truths of early century capitalism (hypocrisy, exclusion, greed) and came to dominate them." He was, also, the son of well-to-do parents who taught his hoodlum protégés to attire themselves fashionably — Luciano once said he "taught me how to dress."

“[Rothstein] has been described as having been mild-mannered, conservative in habit and always calm,” added the soft-spoken Stuhlbarg. “He didn't fidget or curse, he never chewed gum, he didn't smoke, he sipped water; he drank milk; he ate figs.”