Alum stages kid-friendly "Hamlet, Prince of Puddles" at the Bootleg 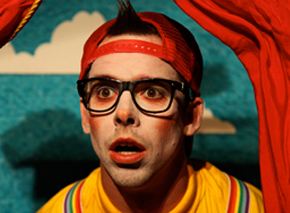 “Hamlet, Prince of Puddles,” the All Ages adaptation of Shakespeare's classic play from new theater group L'Enfant Terrible is returning to the Bootleg Theater for six Saturdays at noon, from Sept. 25 to Oct. 30.

L'Enfant Terrible consists of TFT alumna Angela Berliner MFA ’07 (playwright), Justin Zsebe MFA ’05 (director), and Seth Compton (producer), who formed the group because of their love of storytelling and their belief that amazing, intelligent and subversive theater doesn't have to live in the realm of Adult's Only theater — true universality of storytelling appeals to all ages and all communities.

Their 45-minute retelling of the Shakespeare classic adheres to the basic outlines of its archetypal plot. Hamlet is the Prince of Denmark, but after the untimely death of his kingly father, his mother Gertrude hastily marries his uncle Claudius. When Hamlet learns who is to blame for his father's death, he struggles to take revenge against his murderous uncle and becomes known as the Prince of Puddles!

After a successful run at the Bootleg in the spring, new theater group L'Enfant Terrible brings Hamlet back for a limited run of six performances. L'Enfant is dedicated to creating family-friendly plays that will delight both young and old with their brand of theater magic that will knock the socks off the kiddies and make the grown-ups laugh so hard they'll be making their own puddles.

L'Enfant Terrible wants to make the first experience kids have with theater dazzling and unforgettable. To this purpose, set designer Francois-Pierre Couture and award-winning costume designer Ann Closs-Farley have joined team Hamlet to bring their deliciously wild visions to the stage. “Hamlet, Prince of Puddles” will fall somewhere between a live action cartoon and a wild troupe of traveling rag tag Shakespearean performers.

Summing up L'Enfant Terrible, producer Compton says, “We strive to make work that is excellent and rigorous. In that spirit we infuse this adaptation of ‘Hamlet’ with a being and an aliveness that celebrates risk taking and endless discovery. Like many theaters, we are searching for meaningful connections with our audience. We want our work to be accessible by all and most importantly provide lasting memories for All Ages.”