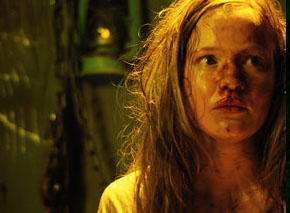 An article in The Hollywood Reporter suggests that a recent TFT graduate's debut feature, "Savage County," a redneck zombie epic set and filmed in Memphis, has become one of the first films to directly use social media to secure a mainstream exhibition break.

As reported here earlier, TFT classmates David Harris MFA ’08, writer-director, and Justin Wolske MFA ’08, producer, had envisioned “Savage County” as a series of 10-minute webisodes. But the quality of the finished product called for a splashier release.

After a social media campaign that has garnered more than 100,000 votes, MTV will air indie slasher film “Savage County” on MTV2 [this] month, followed by distribution on various digital platforms and MTV Tr3s.

It will also become available next month on MTV.com, Comcast VOD, the Playstation Network, XBox, iTunes, Amazon.com and others. Plus, it will get a DVD release.

The film was originally eyed as a Web series. It is about a group of teens who collide with their town’s dark past when a prank gone wrong makes them the target of a family of bloodthirsty killers.

“The incredible thing about MTV is that we have access to our audience everywhere they might be — from social networks, to the Web, to their mobile devices, gaming platforms and, of course, TV,” said executive VP of MTV new media and “Savage County” executive producer David Gale. “Reaching out to them helped raise enough buzz and awareness and drove people to demand the film’s airing in a partnership with digital firm Eventful.”

MTV had said that 100,000 demands would lead it to air the film on MTV2. As of late Wednesday morning, the film had reached more than 109,300 demands.