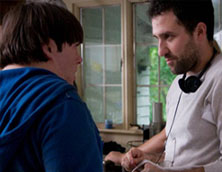 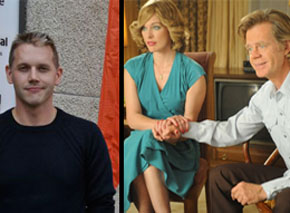 Three recent TFT production/directing graduates who cultivated friendships and worked on each other's student films have all enjoyed breakthrough success with their first full-length features.

Abe Sylvia MFA '06 wrote and directed "Dirty Girl," a coming-of-age comedy about a promiscuous high school girl and her shy, gay classmate who team up for a road trip of self-discovery. Starring Milla Jovovich, Mary Steenburgen, Juno Temple and William H. Macy, the film premiered at the 2010 Toronto International Film Festival, where The Weinstein Company acquired distribution rights for a reported $3 million. It will be in theaters in Spring 2011.

Justin Lerner MFA '07 wrote and directed "Girlfriend," a drama about a young man with Down Syndrome who comes into money and uses it to romantically pursue a single mom. The film's lead is played by Lerner's high school friend, Evan Sneider, 31, an actor with Down Syndrome, and also stars Jackson Rathbone, Shannon Woodward and Amanda Plummer. The film also had a well-received screening at the Toronto Festival before Hannover House acquired North American distribution rights for something "in the mid to upper six figures," according to "The Hollywood Reporter."

David Harris MFA '07 directed and co-wrote "Savage County" a low-budget slasher film set in Memphis that was originally planned as a series of 10-minute webisodes. The film earned a showing on MTV2 in October after garnering more than 100,000 votes in a social media campaign. It will become available next month on a variety of digital platforms, including MTV.com, Comcast VOD, the Playstation Network, Xbox and iTunes. It will also be released on DVD.

"David, Justin and I all go way back," Sylvia says. "All three of us are friends and we all worked on each other's films at varying points...One of our professors said the relationships you make here are going to carry you over the years and it really has been true so far."

The three alum came to filmmaking in vastly different ways, but were drawn to UCLA for similar reasons.

Abe Sylvia grew up in Oklahoma, where his father worked as a political science professor. When Sylvia was a teen, the family relocated to San Jose, California and Sylvia enrolled in the High School of Performing Arts. "I was a musical theater brat," he says. "My goal was to be on Broadway."

He studied dance and musical theater at Boston Conservatory, moved to New York and ultimately achieved his dream, performing in a number of hit Broadway shows, including "The Producers," "Cats" and "Busker Alley." But after several years on Broadway, Sylvia became bored and started writing his own scripts.

"Once a show opens, you're not creating anything new, you're just maintaining," Sylvia says. "It started to feel like factory work, a 9 to 5 job." As a result, he left the original production of "The Producers" after just six months to enroll at UCLA's graduate program in film.

"I got into both USC and UCLA," he says, "but UCLA seemed more personal, more encouraging, more advocates for personal filmmaking. UCLA just seemed geared to helping students find their own way of working."

"It took five years, fourteen budgets and ten financiers to get the financing together," Sylvia says. "Rob Paris and I make a really good team. Rob didn't take no for an answer. Every time things fell apart, we came up with a new plan. There wasn't any luck involved. We just really worked our butts off."

Justin Lerner, who once pulled focus on one of Sylvia's TFT shorts, followed a straighter path into filmmaking. Born in Pennsylvania to parents who both worked at Penn State as developmental psychologists and professors, Lerner became interested in film while still in high school. Although he moved frequently with his parents throughout his childhood, the family ultimately settled in Wayland, Massachusetts, when his parents got jobs at Boston College and later at Tufts.

Lerner studied theater direction and acting with a film concentration at Cornell University's Department of Theater Arts. He took a year off traveling in Spain before enrolling at UCLA's graduate program in film, his "first choice."

"I wanted to go to a film school that was friendly to independent writer-directors and it was attractive that strong voices like Alexander Payne, Brad Silberling and Alex Cox all came out of there," Lerner says.

His UCLA thesis short, "The Replacement Child," a coming-of-age Western that explores moral ambiguity, won critical acclaim and helped launch his career. The film received two student Emmy awards for "best drama" and "best director," had its world premiere, was an official selection at the Telluride Film Festival and played in nearly 50 film festivals.

It also included two scenes with Sneider, Lerner's high school friend with Down Syndrome. When producer Jerad Anderson saw the short, "he fell in love with Evan, and said he wanted to work on a project with me that included him," Lerner says.

Lerner started outlining the story in late 2008 and wrote the script in less than a month in April 2009.

"I felt like I was the vessel and the script flew out of me," Lerner says. "We were shooting four months after I wrote it. It was the quickest turnaround I'd ever had in my life."

By May, Anderson had secured private financing — very low budget, Lerner acknowledges — to pay for the film. By setting it in Wayland, Mass., where Lerner and Sneider attended high school, and using friends in the cast and crew (classmate Quyen Tran MFA '07 served as director of photography) he was able to make the money last.

"Shooting in my hometown really made it possible to get the film financed," Lerner says "It was a big community effort. I used my parents house for the crew, we shot in my friends' houses, the local delis and coffee shops donated food. Even the police cooperated with us: Wayland police helped us block off streets. Without the support of all the people in my town, the film would not have been possible to pull off with our budget."

David Harris, son of an advertising executive and an attorney, also found a way to make a big film on a tiny budget.

A native of Bedford, Texas, a once-wooded suburb built in a former ranching community near Dallas/Ft. Worth, Harris developed a strong eye for visual detail at the Rhode Island School of Design. When he graduated, he took a job as creative director of a small advertising agency in Texas before deciding to make a short film about bullying and school violence. "The Knocking Box" screened at several festivals and served as a good learning experience, Harris says. "It ultimately drove me to grad school."

Harris says he chose UCLA because "it was a writer-director program and the focus was on independent filmmaking. I didn't want to generically learn about film. I wanted to learn to speak to actors and write scripts in a way that makes for good filmmaking."

When Harris graduated from UCLA, he got a job on the technical side of MTV New Media, which creates original content for the internet. Harris, who had penned the outline of "Savage County" while a student at UCLA, pitched the story to his boss, David Gale, who produced Alexander Payne's "Election" and distributed "Napoleon Dynamite." "I told him I thought the horror genre would work really well as a web series," Harris says. "and we did an eight minute pilot to show what it would look like.,

Harris married classmate and filmmaking colleague Amy Adrion MFA '07, and when he returned from his honeymoon he was surprised to discover the web series had been greenlit. He began working on the story, which had a budget of $250,000, with several other UCLA alumni, including producers Justin Wolske MFA ’08, Corey Wish ’05 and co-writer Daniel Alvarado, cinematographer Paul de Lumens and editor Gabriel Noguez ’08.

Mindful that "Savage County" was too gory to secure sponsors, Harris produced a feature film cut of the web series to present to the network. In partnership with Eventful, which handled the "Paranormal Activity" campaign, MTV agreed to air the movie if 100,000 people saw the trailer for the project and wanted to see more.

The campaign began in late August, logged 130,000 demands and ran as part of the "October Block of Horror" on MTV2 on Oct. 7.

While "Savage County" may not appear to be an example of "personal filmmaking" in the same way Sylvia's and Lerner's films are, the story "does come from my personal mythology," Harris says. "When I was a kid, we didn't have cable or VCR, so slasher flicks and 'skinemax' were the movies I would sneak into my friends' houses to watch after thir parents went to bed. Afterwards, we would go into the woods terrified that the toothless man in the abandoned house down the road was a murderer.

"Fortunately, ‘Savage County’ isn't my story in that it's not autobiographical, but certainly it's about the kinds of things I obsessed about as a kid."

While "Girlfriend" and "Dirty Girl" followed more traditional paths to success, "Savage County" offers "a counterpoint to the doom and gloom that's come to the festival circuit,” Harris says. “Abe's and Justin's films are welcome exceptions to the trend of festival favorites that never get real distribution. But even in a world where the theatrical audience doesn't support indie films, ‘Savage County’ provides a case study in using scrappy, inexpensive means to find an audience."

"Almost everything we did would have worked as well for a film made outside the walls of MTV," he added, because "it hinged on creative effort, not a big budget.”